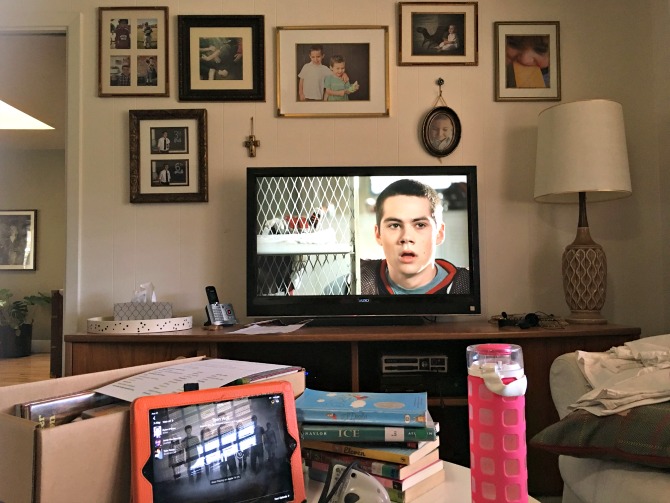 School is starting a a few short weeks, so I’ve reached the Impending Sense of Doom portionofmylibrary project. I’m at the libraryevery day and bringing work home when I leave. I sound all Super DedicatedLibrarian, but it’s been hard for me to work from home. Once I goback home tothe land of air conditioning, I don’t want to work (the library shares an a/c unit with another classroom andit can’t keep both rooms coolonce the temperature exceeds 95–it’s been 101-114). All I want to do is hydrate and lie downon my bed under the ceiling fan with a good book curling in the grip of my sweaty, sweaty hands.

But! Good news!I have new motivation in the form oftwo volunteers coming on Monday.I have to enter a fair number of books so they can turn around and label them with barcodes and spine labels. I debated having them enter books with me, but that requires a few hours of training. No one wants to do that, least of all me, the person whose epitaph will read,You know what? I’ll just do it myself. They have very young children and they want service hours they can do at night in front of the TV when the kids are in bed. Sticking labels on books is, like, dream service hours.

But to get those dream service hours, I have to enter a lot of books and be reasonably entertained while I do it.

Which is how on Tuesday I entered over 50 books while watching Teen Wolf. Not to brag, or anything.

I heard about Teen Wolf a few years ago from the 7th grade girls (now sophomores in high school). I watched the first 10 seconds of the trailer and decided to look for something else to talk to them about because Teen Wolf, or anything on MTV, for that matter, isnot a show for someone who pants over Lutherand other men of dubious moral integrity.

On MondayI was on Goodreads or Tumblr or somewhere teens recommend books, and a book popped up I’d never heard about. It was Teen Wolf fan fiction; obviously a dead end. But that reminded me of those sweet girls trying to get me to watch Teen Wolf, whichgot me thinking that I could never watch Teen Wolf unless I had it on as background while Idid something else, which made me sit up and say wait a minute…

An hour later the Mister and I had the first episodestreaming on Amazon Prime. Thirty minutes later he shook his head and said, “What was…that was…that was awful! Really, really awful, Jules.”

I told the Mister when he got home that I entered 50 books into the system while watching Teen Wolf. Once he managed to smooththe look of horror from his face he asked, “And how was that for you?”

“Fantastic,” I replied. “Teen Wolf is exactly what I was looking for because the show is muchbetter when you’re not actually watching it.”

You guys, entering books while watching lousy TV is the best thing ever for my productivity. I need more Crap TV* recommendations just in case I can’t get past the first season or two of Teen Wolf. We don’t have cable, so the showhas to be available on Netflix, HULU, or Amazon Prime.

Here are some shows I’ve tried and just can’t do.

Here are twofun shows I enjoy, so they won’t work for entering books. I’ll start watching the show instead of entering the books. Two shows! That’s it! Looks like I need some more fun shows.

*Crap TV is a lazy way to label a show that doesn’t require a ton of attention to enjoy. I’m not saying it’s bad, nor am I judging you for watching said show. Hahaha! YES I AM.