There’s nothing to read.

Alright, fine. There’s nothing that sounds good enough to read. Sometimes I go through periods where everything I read is remarkably terrible. I hate everything; there is nothing new; the publishing world is out to get me. I know it’s because I’m reading too much in general or even too much of the same thing. Either way, whatever, I get monumentally jaded and watch TV. Call it a palate cleanser. Here’s what I’ve been watching lately, and of course I want to know what you’ve been watching, too. 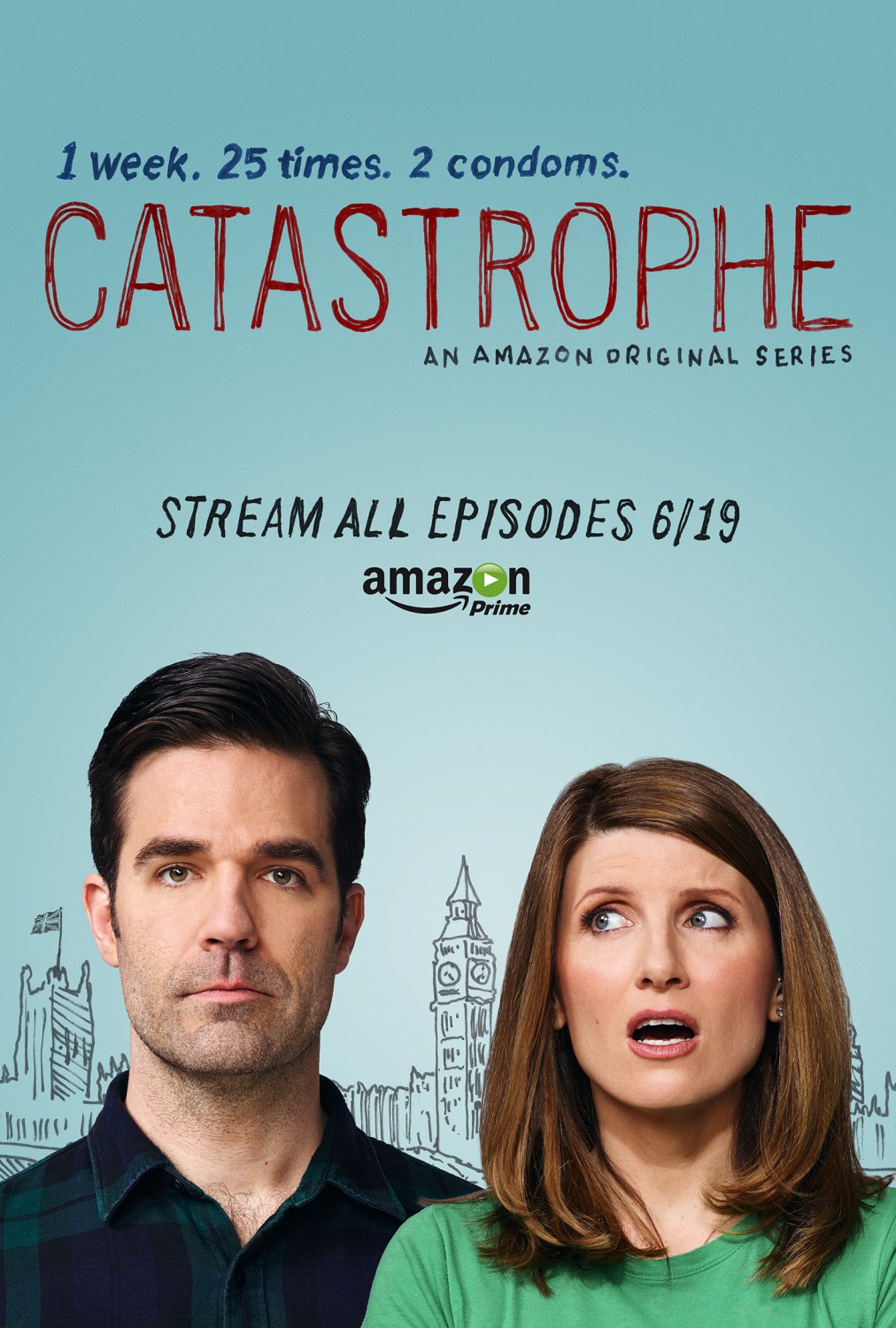 You don’t need Amazon Prime to watch this British TV show written, produced, and starred in by Bob Delaney and Sharon Horgan, but if you have it you can watch it for free.

Rob, an American ad executive visiting London on business, has a week long tryst with Sharon, a Irish school teacher living in London. Rob, back in the States, receives a call from Sharon in the middle of an awkward first date and finds out that, catastrophe of all catastrophes, they’re going to have a baby. Maybe.

The trailer sums up what I love about the show, and that’s Delaney’s injection of dry, sardonic humor. His ‘Rob’ is self deprecating and witty, and most of all nice. He’s a good guy. Rob flies back to London and takes ownership of the situation with earnest American charm. When Sharon begins to panic about having a baby with someone she just met he replies, “I’m not a stranger. I’m a familiar acquaintance. A friend who helped you make a mistake but will now help you … figure it out.”

There’s only one season out right now, with season 2 currently in production.

Mr. Robot is a show I picked for the Mister, who loathes social media and believes online privacy and cybersecurity is a myth. It’s a psychological-thriller that I often find unsettling. Yes, I love and watch The Walking Dead, but I’ve explained that one already–those zombies aren’t real. They are a character exploration tool. Mr. Robot is very real. Elliot Alderson is a clinically depressed, socially detached young man living in New York. He works as a security engineer at a cybersecurity firm, white knuckling his way through crippling social anxiety and paranoid delusions using a mixture of drugs and cyber vigilanteism.

Elliot connects to people the only way he knows how–by hacking them until he knows every facet of their life, which he then burns onto a disk and hides under his bed. In this first scene of the first episode he confronts the owner of his favorite coffee shop.

The show is dark, and when I say something is dark you should take note. When an anarchist hacker named Mr. Robot recruits Elliot to join FSociety in bringing down one of the world’s largest, most corrupt organizations, Elliot’s tenuous hold on his sanity loosens until he no longer can differentiate between reality and delusions.

What makes Mr. Robot so chilling–besides the fact that much of the storyline is true or has since come true–are the supporting characters. Elliot is mentally unstable and as viewers we’re never sure if what he sees is real. The supporting characters (do they even exist?) are no more comforting. There isn’t an unambiguous moral compass in the cast with, perhaps, the exception of Elliot’s boss, Gideon Goddard, a man Elliot reluctantly admits is a “good person” after hacking him repeatedly in search of sins. Everyone else is violent, deranged, emotionally unavailable, or struggling in one way or the other.

I can’t wait for the season finale on Wednesday. 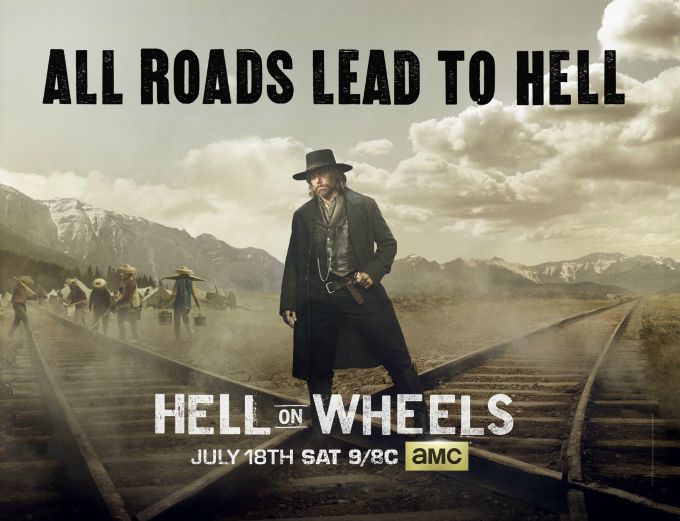 I have such mixed feelings about this show. I watched it religiously when it first came out but lost interest after season 3. I took a break until a documentary on Chinese workers and the Central Pacific Railroad this summer inspired me to watch it again. Season 4 was excellent but Season 5 premiered with a spiritless and prosaic episode.

What’s great about Hell on Wheels: the acting, across the board. Anson Mount, who always comes to mind when I think of amazing, underrated actors, plays his role as Cullen Bohannon so fully that I forget I’m watching a historical TV show. Anson Mount does make-believe very well.

For me, acting is a process of make-believe. There’s no getting stuck in character. That’s a complete mess. Sometimes, I feel like I’m on a one-man mission to change American minds about this. I think that there is this tendency in our society to think about actors as these shamans who channel these alter egos and go through soul-crushing experiences in order to create a performance. It’s not. It’s just not. It’s make-believe. I think that there’s a lot of actors out there who buy into that myth because it makes their job seems more important. It’s just not. It’s just make-believe. It’s playing make-believe well. It’s playing make-believe with a sense of craft and responsibility to the material, but it’s make believe. [source]

There hasn’t been a bad actor on the show yet, and with season 5 being the show’s last season, I don’t expect that to change. However, the show is not without its faults. The female characters thus far have been a near constant source of disappointment. It’s not that the show lacks strong female actors (they’re all great) or that they aren’t given due attention. It’s that they’re saddled with uninspiring and expected roles. You have the hooker with a heart, the plucky female reporter, the moral compass, and the mother figure. You can do better, AMC.

Hell on Wheels was never meant to be a historical romance–at least that’s not how I saw it. I always saw it as an exploration of a man’s struggle with life after the war and all consuming ambition. Cullen Bohannon is a war veteran who channels his trauma into the building of the railroad. He couldn’t be a farmer, he couldn’t win the war, he couldn’t save his family, and he hasn’t shown any ability to emotionally connect with someone without losing them–but he can and will, by God, build that railroad. He is constantly winning and losing everything. He’s all of us who have wanted everything until it was just within reach and we ruined it on purpose.

Hear that, AMC? Cullen Bohannon is all of us, men and women included. Show me a woman, especially today, who hasn’t suffocated under the weight of her own ambition, who hasn’t made missteps that cost her everything, who hasn’t, at the end of the day, wondered if it was really all worth it while grabbing for more. Show me that woman or show me her compelling polarity, but don’t show me a predictable character trope.

What a missed opportunity to develop an interesting female character. We’re talking about the period immediately after the Civil War, a war where 200-500 women fought in secret according to conservative estimates, and this number doesn’t include spies, nurses, or  vivandičres. Surely one of those women needed a job on the railroad? I once read an article–I’ve searched for hours, can’t find it–on a woman who became one of the largest suppliers of steel during the construction of the railroad because her husband died unexpectedly. When asked about it she said (paraphrasing) “someone had to do it.” I’d love to see a character like that on Hell on Wheels; bonus points for not making her a love interest.

There is one quasi-strong/interesting female character on the show, Maggie, but she’s regularly irregular. She appears a few times per season when there’s business trouble or someone needs money. Then she does something “a strong female” would do and exits stage left.

In this last season, Cullen searches for the Mormon wife who left him and works with Fong, the son of a Chinese foreman who is a woman in disguise. Bohannon discovers Fong’s secret when an unwanted bandage change results in The Great Boobs Reveal of 1868 (TGBR ’68). This is where I left off, and I’m praying TGBR ’68 doesn’t transition into the season of Longing Glances and Grazing Fingertips. There is potential for Fong to be the strong female character I’ve hoped for all along, so I’m watching until the final episode.

This concludes my ridiculously long post on three shows I’m watching on TV. I’ve got my eye on a host of other shows (damn you, Apple TV) and will report back with worthwhile discoveries.

Day 116: Huh? Not even a little Pug? #rescuedogsof