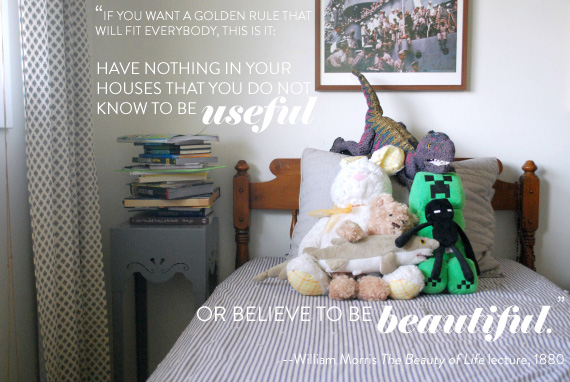 I chose to make this picture of Mikey’s corner of the bedroom the picture for The William Morris Project this year for a reason. In its own way, it says more about the project for the year than I ever could, and faster, too.

We paid a professional to have the walls painted a soft white (Moonlight White with Simple White trim, both by Benjamin Moore). The bed is from Craigslist and the bedspread/quilt is one I made. The table to the left is a plant stand we spray painted gray. Mikey uses it to hold the books he reads most often at night, and the pile is his to manage however he likes. The stuffed animals are his and stay out all the time unless one falls out of favor. I don’t have a say about who goes on the bed and, frankly, I could think of a million other things more important to think about. It’s why the bed has wrinkles; Mikey had to position each one just-so. The cord hanging from the blinds could have been edited out, but wasn’t. That is real life.

A brief history if you are new since this will become an informational post as the year goes on. In 2011, my friend’s parents unexpectedly died a little over two weeks apart (aggressive pancreatic cancer and a broken heart, basically). They left behind an overwhelming amount of “stuff.”

Here’s what I had to say about that time and how it changed my life.

The William Morris Project began as my attempt to create an intentional home for my family. This year, I’m broadening it a bit to include my efforts to apply the William Morris quote to my health and personal life. This means more walking, less drama. Running a more efficient home–whatever that means (must Google!). Trying–really trying–to wear purple before I’m old. That was figurative, by the way. You’ll have to wait until next year for 365 Days of Wearing Purple.

The William Morris Project is a lot of things, but there’s a lot it isn’t, too.

The William Morris Project is not a race. One, I have a life I would like to enjoy and two, there is no finish line. OK, there is, but I’d like to avoid focusing on it because death is the only way to effectively prevent the production of clutter.

The William Morris Project is not a competition. Some people DIY everything. Some people pay professionals. Some people can afford top dollar and others are on a budget. I’m firmly in the middle and don’t see myself moving from that spot anytime soon. I guarantee there is a blogger out there doing what I do cheaper/faster/better/more pinterest-y. I think that’s great.

The William Morris Project is not about my quest for minimalism. I’ll talk more about this as the year goes on, but any of the posts I linked to in my brief history above will give you an idea of where I stand. I will not try to reduce my possessions to some magical number. I do not believe a magical number exists, or at least not a universal one. I once did a post on organizing my boys’ shoes and a year or so later someone commented that they still had too many shoes. I emailed her and suggested that “to each their own,” but she replied that, no, I was wrong. Too many shoes! She grew up very poor, and if I grew up as poor as she did, I would realize that my boys had far too many shoes.

I thought about what she wrote for a long time and debated replying back, but then I remembered something important. 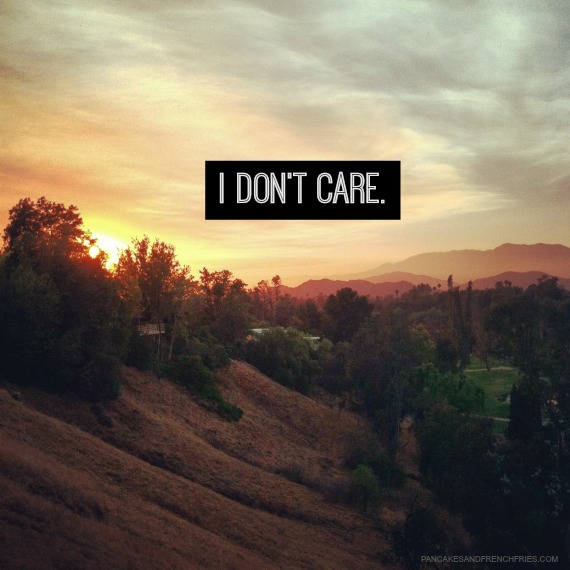 Also, see above “not a competition” paragraph.

The William Morris Project is not a posting marathon. Even though the project is 365 days long, I won’t post every day. I’ll use my best judgment and hopefully that means I’ll post when a project is more interesting than not. I will post the mundane minutia projects because we all have those hanging over our head. Not every project can be a coffee table made out of antique fruit crates.

That’s it. I hope for this to be a mellow, low pressure year, and I welcome anyone who wants to join me! I won’t be doing link ups since my posts won’t be limited to one day of the week, so if you’ve done a project you are free to leave a link in the comments.