The project I’m about to share will either inspire or inflame. I’ll rip the band-aid off right now: we’re an underwear folding family. I’m pretty sure it’s something that is passed down through the generations. I grew up in an underwear-folding family, and so did the Mister. We don’t fold the boys’ underwear. I tried once, but they ended up looking ridiculous, like Chunky Bars. Besides, the whole point of folding underwear, aside from keeping your drawer organized, is that it saves space. Chunky Bars don’t save space. 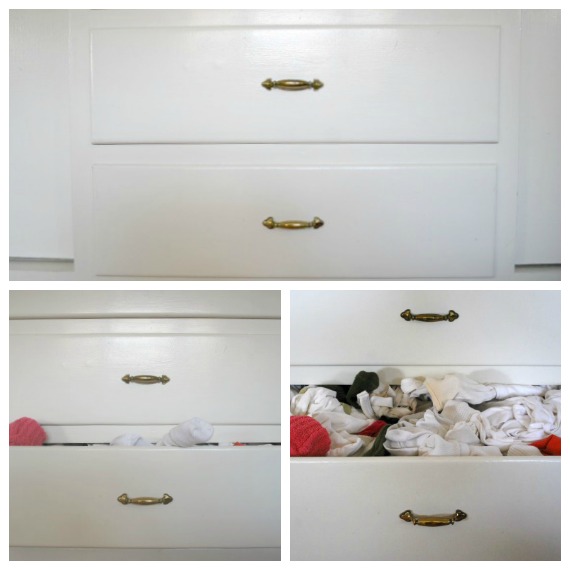 Wait, wait. What? That doesn’t look like the drawer belonging to someone who folds their underwear into tidy squares. It is, and here’s what happened. All that stuff, I didn’t really know what it was. I used to, and I remember the drawer being organized at some point, so at some point I knew what that stuff was and considered it important. Eventually that changed and things got jumbled. When I put away the laundry, I rested my tidy squares on the rolling waves of cotton and pushed everything down so I could close the drawer.

Oddly enough, I have a place to store undergarments. I have two drawers and the organizers I used as a tween sitting empty, for the most part, and the reason is telling. It’s the real reason for this post, much more important than folded underwear tucked into tidy boxes. 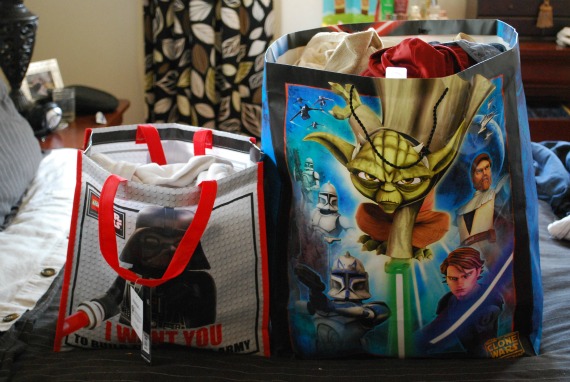 I had a friend who would buy herself new socks, new underwear, new t-shirts. Little things, big things, cheap things, expensive things. Then she put it all away neatly and used her old socks, underwear, and t-shirts because she didn’t want to ruin her new purchases. I never judged her because I did the same thing.

Then I stopped buying new things as regularly, because I wanted to wait until I lost weight.

And when I lost weight, I waited until my underwear drooped until I bought something new because I still wasn’t at my dream weight.

I kept the old underwear just in case.

When I regained the weight, I was glad I did.

I kept the smaller underwear because I knew I would one day lose weight again, this time for the last time.

I emptied out that drawer and stuffed to bursting a large gift bag Mikey received for his birthday. In the small bag went the few undergarments worth keeping. In that drawer were t-shirts from high school; socks from college; maternity bras and underwear; expensive underwear I never wore because they were uncomfortable; ill-fitting bathing suits I stopped wearing years ago; gloves I received as gifts; and a whole lot of stuff that was no longer important or organized. I tossed and donated all of it.

I won’t save it, or tuck it away, or spare it from being ruined while I wear frayed cotton and loose elastic. It occurred to me when I found a handful of black underwear–years old, barely worn–at the back of the drawer that by cherishing my purchases, even those as mundane as underwear, I placed their value above my own. I unwittingly made a scrap of $7 cotton you’re supposed to sit on naked more important that my body image, my self confidence, my ability to look in the mirror and say, “I’m not where I want to be, but I’m taking care of myself.”

That, to quotes my non U.S. friends, is bollocks. (Did I say that right, Londoners?) 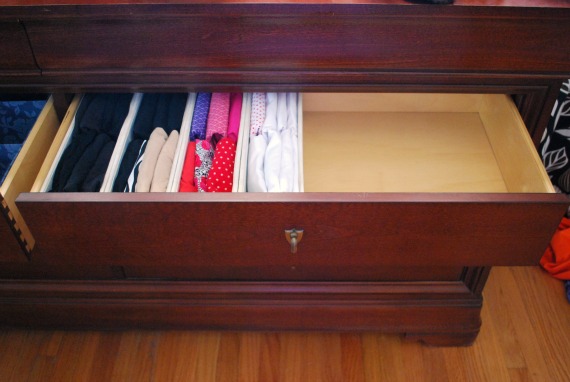 The bras lay flat in that empty space. 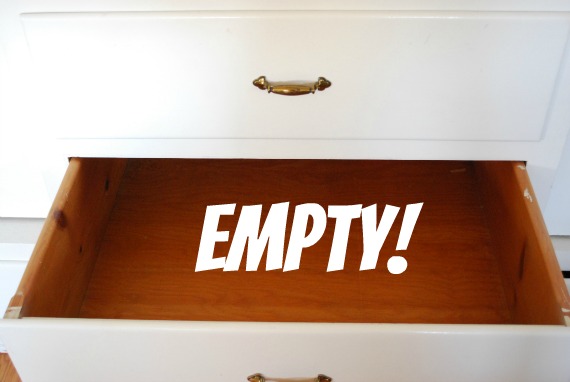 This post was part of The William Morris Project, a weekly series that details the steps I am taking to create an intentional home. You can see more of my goals and completed projects here. To learn more about this project, start here.

Now it’s your turn! Feel free to share how you have lived according to the William Morris quote, “Have nothing in your houses that you do not know to be useful or believe to be beautiful.” Made a plan? Cleaned a drawer? Bought a sofa? Tell us about it with a link or comment. A few guidelines: