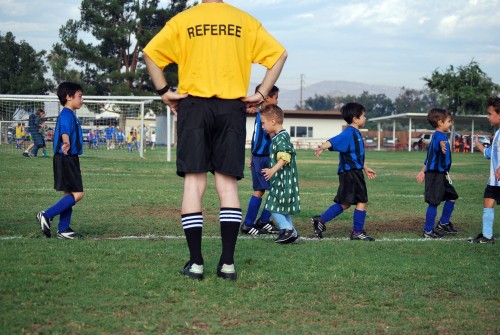 Soccer season starts in a couple of weeks. There go our Saturdays. Even better, I’m the Team Mom for Mikey’s team. It’s a big job. Mikey says I am now “the entire team’s mom, whether they have a mom or not.” I don’t think so, child.

I volunteered because I saw it as another opportunity to foist myself onto my children. It’s a parenting tactic I learned years ago watching an episode of Oprah with CBS correspondent Steve Hartman. He was there to promote a segment he ran called Everybody Has a Story. The premise was simple. Someone from his studio threw a dart at a map of the U.S. He traveled to whatever town the dart hit. Upon arrival, he picked a person from the phone book at random and interviewed them. He believed everybody had a story. To prove his point, he tossed a dart at the seating chart for the Oprah show and hit a seat occupied by a mom convinced her life was boring. He interviewed her. She had a story.

She was a mom to two grown kids, a girl and a boy. If she had a career prior to that, I can’t remember. The kids were interviewed as part of her “story” and they described her as always present and involved. They gushed that their mom was there for every school event, every performance, and every game. Room mom? Of course. Team mom? No doubt about it. Play Groups? She lead the pack. Her son smiled at the memory. “Mom was always there for us.” Blink. “I mean, whether we wanted her there or not, we knew mom would be there.”

His joke implied she was on them like wet t-shirts, but you could tell he secretly loved his mom’s involvement. Somehow, by sticking to her children like a barnacle, this woman with a story managed to endear herself to them. I knew right then I was going to be a barnacle.

What I didn’t know was that being a team mom in soccer means you need to be more like a shark. Or stingray. A puffy fish? Maybe a tidal wave. Basically, you need to be something with thick skin, an electric personality, a good defense mechanism, and the ability plow through hoards of people without looking back. All this to pick up uniforms.

Yesterday I attended a meeting to discuss my role as a team parent. I didn’t realize team parents attended meetings to learn how to plan pizza parties, but I went willingly and showed up early because I am me. I filled out my forms and settled down on the bench to read while I waited for the doors to open. I looked up twenty minutes later to see dozens of Jersey Maid parents hearding themselves into the hall. Somehow, I missed the announcement the meeting was now in session.

I slammed my book shut and ran inside, hoping to find a seat. The front row had several seats available (my favorite) and for a brief minute I considered myself lucky. Then I realized I was, again, just me. I was also the only one to show up with a three-ring binder, notebook paper, twelve pens, and the team roster.

The only thing I didn’t have on me was makeup, a fact I realized when I scanned the room and saw every other person I have ever met staring back at me, including a random guy I knew from somewhere and see every year on the fields. He only wears licensed USC clothing and his eyebrows are distinctive.

So I sat in my seat and immediately started sliding thanks to the Lycra in my dark rinse jeans. I couldn’t get purchase. If I wasn’t crossing and uncrossing my legs, I was squirming. And scooting. And shifting. Or planting my legs shoulder width apart to create leverage, which caused all my team mom paperwork to slide down my thighs and land at my feet.

I have a bit of a staring problem, as I’ve mentioned in the past. There was a man there who bore a remarkable resemblance to John Irving, one of my favorite authors. He also had feet like cloven hooves. He didn’t walk, he pawed at the earth. I lost a solid twenty minutes of a two hour meeting staring at feet that could stop a car traveling 60 miles an hour.

Then, people in charge talking. The woman handling uniforms said we were required to distribute jersey numbers according to size, and that she was “going to be checking up on us on the field to make sure we followed policy” because this was serious business.

Okay, sounds good. If you need me, I’ll be the one walking in the direction of a life with meaning.

Finally, it was time to collect our team uniforms. Thanks to my decision to sit in the front row (nerd ftw!) I was one of the first team moms in a very long line. I sidled up ready to pluck my spoils from the shipping box.

Denied. Another form missing, another opportunity lost. I went back to my slippery chair, sat down, greeted more people I didn’t expect to see, and tried to hide the two pimples on my left cheek with my limp ponytail. I scrawled in the answers to the missing volunteer form to the best of my abilities using the penmanship of someone who plucks the scales off fish for fun.

Another wait in line, another denial. I followed that one with a torrent of many sharp words and all the love of Jesus in my heart.

Then, a beautiful woman to my left turned to me and smiled. “I know you. You went to high school with my husband and helped put together the 20th reunion.”

To which I eloquently responded, “I!? Yes. Hi! OF COURSE YOU ARE HERE.”

Back to my slippery chair. More paperwork, then back at the end of the line. I was almost to the front when the bushy-browed USC guy took cuts. Go Bruins!

In the end, I walked away with my uniforms and completed my barnacle mission. I was in good spirits walking across the dark and gravelly parking lot. So much so that when I crossed paths with USC guy, I decided to strike up a conversation and see how I knew him. He didn’t know me from Adam, so we started the game where we rattle off business, churches, and schools to make a connection. I started off by asking him if he attended my very large, very Catholic sounding church.

Gasp! Sputter! “NO! You do not know me from there.”

Well, pardon me! I just noticed your dragging knuckles and assumed you were a fellow blood drinking Mary worshiper. My mistake.

It turns out he is Baptist and when I described him later to the Mister (who never forgets a face), he remembered him as a parent at Mikey’s preschool, which was Methodist. Sinner.

I spoke at very high decibels on my cell phone to the Mister all the way home. He didn’t even try to hide his laughter, and I got no sympathy from him. He’s been the assistant coach to every organized team Mikey has joined. He very much looks forward to my miserable company.

An hour later the coach for Mikey’s soccer team called to see how the meeting went and if I had any problems getting the uniforms.