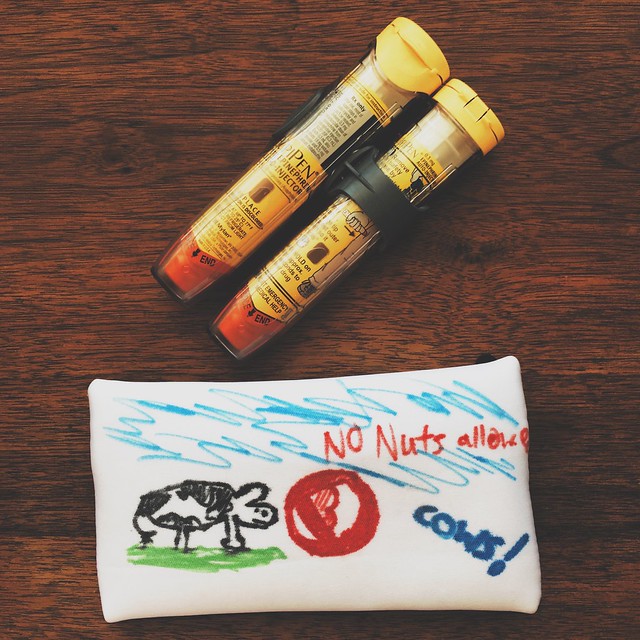 Yesterday I posted this picture on Instagram with the following caption.

Nico is okay with having a nut allergy. He has no desire to eat nuts! It’s one of the few good things about remembering what anaphylaxis feels like. Occasionally, though, he gets down. Usually this coincides with school activities and food made in nut facilities. Holidays (Halloween, Easter) are okay because he knows we’ll have something just for him that he can eat. Anyway, long story wrapping up, I was shopping for teachers’ gifts when I saw this doodlecase. He had a great time decorating his own epipen bag, which I now keep in my purse. Still on the lookout for a cute, boyish fanny pack he can carry on his own. The mini messenger bag we got him kept getting left behind!

Then I gave Nico a generousĀbowlĀĀof fresh cherries I bought the day before. I debated taking a picture of the bowl and making a comment about how I never eat cherries thanks to that scene in Witches of Eastwick, but then thought to myself, Jules, no. No one cares why you don’t eat cherries, you 2016 over-sharer. IĀskimmed Instagram for pictures tagged #epipen instead. ĀI wondered why some people were using the tag when the picture had nothing to do with allergies. I googled it, came up with nothing. I decided I didn’t need to keep up with everything 20-29 year olds do these days. (I admit I’m still curious.) I told the boys to get in the car, we were taking Mikey’s friend home.

Twenty minutes later, with the friend dropped off, we were on our way home. Mikey and I talked about how we were going to relax when we got home. Nico, sitting in the front next to me, said nothing. I looked over and saw him hunched against the door. I asked him to look at me, and he did. His cheeks were pink; he looked terrible. “I don’t feel well,” he said.

I pulled off at the next exit and made it to a driveway of a car rental office. I told Nico to walk to the trash can and see if he could throw up. I told Mikey to go inside the rentalĀoffice and ask for a trash bag. I cleaned out the back seat of comic booksĀso Nico could lay down if he needed to.

Nico never made it to the trash can. But once he vomited (vigorously) he turned around and said he felt instantly better. This is why I don’t eat cherries, I thought. They’re the puke fruit.

The boysĀgot back in the car. I gave Nico the bag Mikey got for him and asked him how he felt. “Much better. I won’t throw up again.”

I tried to get on the freeway, but missed the turn when a larger truck wouldn’t let me in. I took side streets. At aĀred light, I looked back at Nico. He was quiet but calm, staring out the window. I noticed him scratch his armpits.

At another red light, I saw him rub his face and scratch his forearm.

At another red light, I picked up my phone. 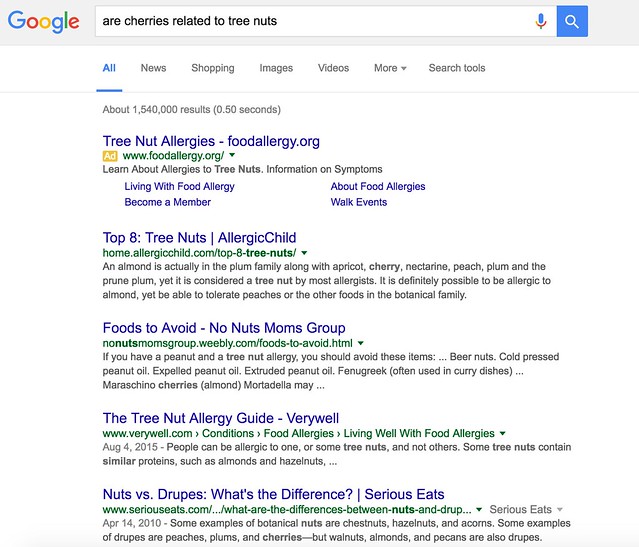 I felt like the worst mother in the world.

We were next toĀhis allergist office, which is next door to the urgent care. I pulled into the parking lot. I got out of the car and checked Nico’s trunk, his back, his face, tongue, eyes, ears, palms of his hand. Everything looked normal, except for his cheeks which were just the slightest bit pink. Already less pink than earlier. Whatever was going on, it was nothing like what happened in July. We would be okay. (I just reread that post. Yuck. My fear oozed out ofĀevery word.)

The doctor wasn’t in, so they sent us to the urgent care. They treated us very well and saidĀthat whatever happened, it wasn’t severe–thanks in part to Nico turning into a cherry firehoseĀin the driveway of Enterprise Rent-A-Car.

They couldn’t give Nico Benadryl at the urgent care because it was red, and the pediatrician didn’t know if it had cherry flavoring or color. I went to two pharmacies before I found a dye-free, bubble gum flavored Benadryl. Cherry is a top seller!

“Call hisĀallergist first thing in the morning,” the pediatrician said.

If you read this at or around 8:30am PST, that’s what I’ll be doing: calling Nico’s allergist. What’s so bizarre is that we recently had him tested. His results were so low for nut allergy* that his doctorĀrequested all of Nico’s medical records from Nevada (hospital, ambulance, urgent care). “It great that he may not be allergic to nuts,” he said. “Not so great if we can’t figure out what triggered the event inĀLake Tahoe.” HisĀhope is that NicoĀwas never in anaphylactic shock, but just had a really, really bad hive reaction and everyone panicked. In my heart, I know that’s not likely.

I’m hoping he ate too many cherries and that his stomach was just a little upset. I’m clinging to the old medical adage about hoofbeats and zebras.

*Nico did test off-the-scale-positive to a formaldehyde releasing preservative. More on that soon.