I try to always learn from my mistakes. Really. This is why this time, I didn’t call the Mister. (So impersonal!) This time I walked into the house and simply stated, “We have a problem.”

To which he responded, “What the hell is that?!” 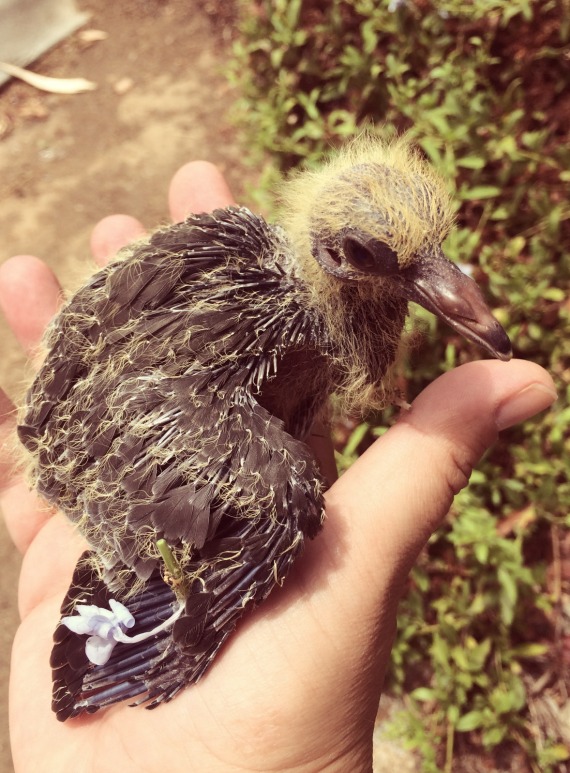 With a long-suffering sigh I said, “A baby bird. Obviously. He needs my help so I had to bring him home. My hands were tied!” My hands are often tied, just in case you’re new here.

“I know what it is,” he said. “I meant what is it doing in your hand and inside our house?”

It’s like he missed the whole part about the baby bird needing me and my hands being tied. Like all good stories, I began at the beginning.

I was on my way to the pharmacy, approaching a 3-way Stop-Sign intersection. I made my stop and thought I saw something on the ground. I looked behind me and saw a car in the distance, so I took the opportunity to reverse a bit to see what it was. It was a bird.

Seconds later, when the car behind me pulled up–young guy, tattooed sleeves–I walked up to him and explained the situation. “I’m going to move it off the road,” I said. “I shouldn’t take a minute.” Out of the corner of my eye, I noticed another car stop.

He mumbled something in typical young guy fashion as I ran over to shoo it, only to see it was a very young bird–mostly fuzz and a few feathers. You can’t shoo something that can’t walk! As I got closer, a boy Mikey’s age ran over to pick up the bird–or at least tried to if his motions to pick up the bird while simultaneously recoiling in horror were any indication. I debated letting him do it, maybe even helping him out, thinking it would be a great opportunity for the boy to get in touch with nature. Or whatever.

Then the boy’s mother, who was parked in the middle of the road with her son’s car door wide open, leaned back and at the top of her voice screamed, “ˇAgárralo!” (Translation: Grab it!)

I objected to her tone. The tone that suggested we were in the middle of a zombie apocalypse and before us lay the last crossbow known to man. I thought if she wanted the bird so much (as a pet, I’m assuming), she should have pulled her car to the side of the road and pick it up herself, since her son was clearly terrified of being pecked to death.

Then she screamed “ˇAgárralo!” again, but in that distinctive way Hispanic mothers have, mine included, where they elongate the accented syllable with a ferocious roar until all they have left is a gasp of air with which to spit out the rest of the word. So, instead of ‘ˇAgárralo!’ it was more like ‘ˇAgáaaaaaaaaaaaaaaaaaaaa…rralo!’.

I leaned over and plucked the bird from the ground without sparing the woman another glance. I couldn’t! By this point, my side of the Stop-Sign intersection was 4 cars deep. The tattooed boy knew what I was doing, so he was patient. The car behind him had two women with enormous 1980s bangs. They were not as understanding as I climbed into a plant border with trees and laid the baby bird down among the leaves. Curious, I thought, that those women should be so rushed for time when their hair was running 30 years behind. 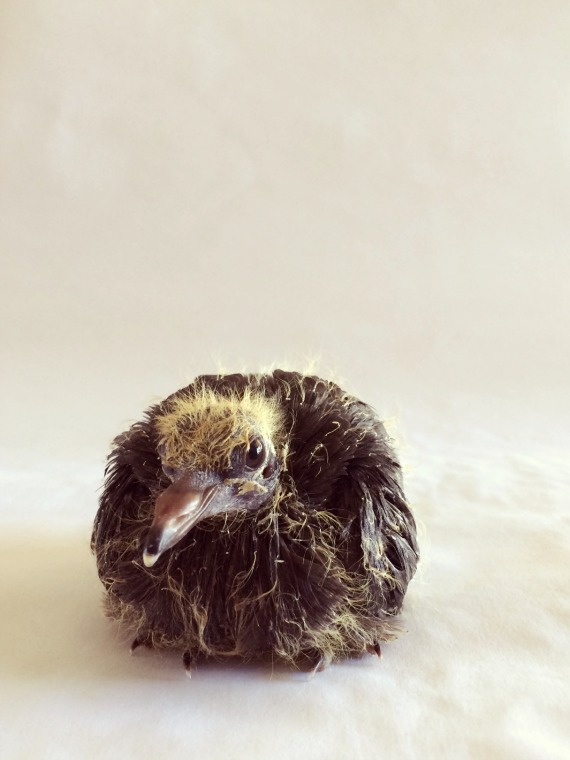 I got in my car, put it in drive, and then immediately pulled over to the side of the road and went to look for the bird. I saw images of him being torn apart by cats! I took him home to call animal control so they could pick him up and rehabilitate/release.

“So you see,” I said to the Mister as I finished my story. “We aren’t keeping the bird. We’re just holding it until animal control gets here in a couple of hours.”

Animal Control arrived two hours later. I handed over the bird, which at this point I had in Buttercup’s special carrier with some seed. I watched the agent walked away with my little rescued friend in the palm of his hand. “Out of curiosity,” I asked. “What will you do with the bird?”

“Honestly? We’ll put it down. We don’t have the man-power or the resources to care for another wild animal.”

I thought about the Mister inside and how he didn’t want another pet. I thought about how I told him I wasn’t bringing home another stray. “Can I keep it and take care of it?”

At least I thought about it.

“Well, sure,” the agent said. “I mean, I figured you would be a good person to give it a try seeing that you have a special carrier. For your bird. You, uh, seem like a bird person.” 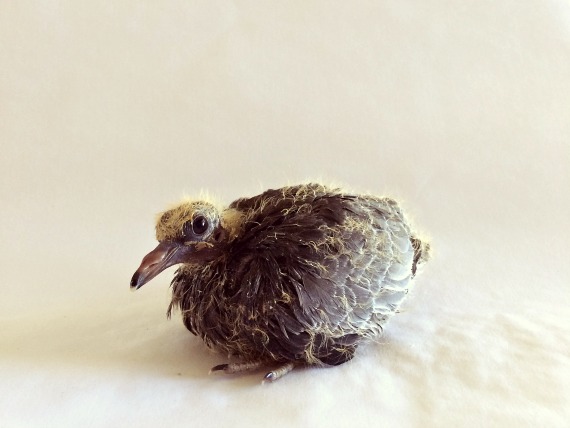 Ten seconds later I was back inside the house with the bird in my hand. “We have another problem,” I called out.

“What is it this time, Doctor Dolittle?”

“Would you believe my hands were tied, again?” 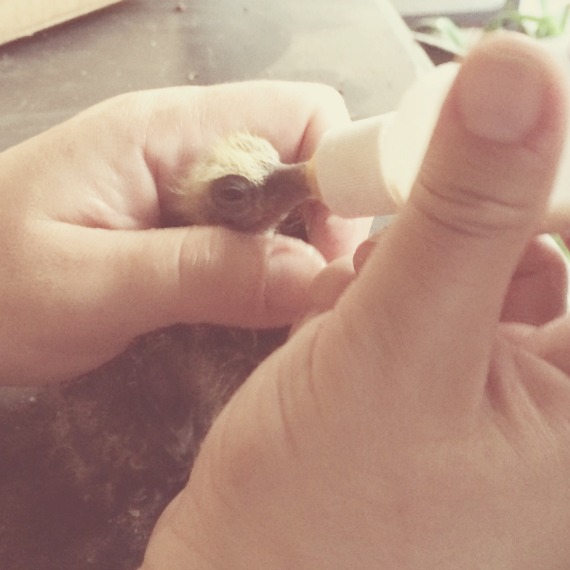 And that’s how I came to bottle feed a baby bird on a Saturday night. Mikey named him/her Snickers, which I think is perfect. I took Snickers to a bird farm and they said he/she will need to be bottle fed for at least another 3-4 weeks. After that, we can wean him and get him ready for release. We aren’t sure if he is a pigeon or a mourning dove, and we won’t have a definitive answer for weeks. They’re in the same family, Columbidae, so they look very similar when young.

Only I touch the bird, much to Mikey and Nico’s disappointment. I think it’s safer, even though we had the bird checked and it’s healthy. Also, I don’t want Snickers too accustomed to humans since we’ll be releasing him in a month. Even then, if everything I have read is true, Snickers will return to visit us often.

As for the Mister, as I type this he is checking on Snickers, the bird he didn’t want.