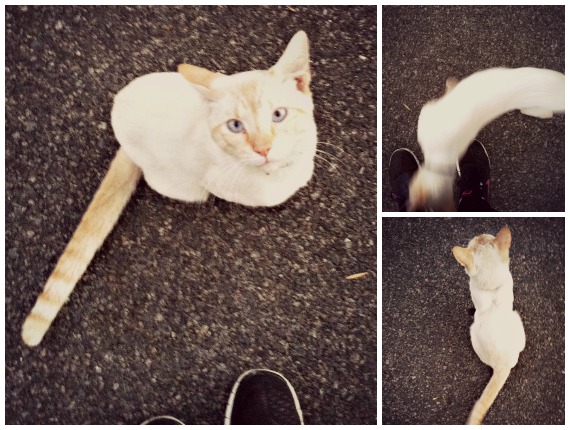 This is Morris. I don’t know who he belongs to. I was walking last night when I saw him resting with his back to a planter, looking like he ruled the world, as cats often do. Normally the cats in my neighborhood skedaddle when they see a stranger coming, but not Morris. He just stared at me, so I took out my camera to take a picture of him because I thought he was one of the prettiest cats I had ever seen. I was doing that when an older woman walked up and talked for a very long time about Morris. This is how I know his name.

I thought Morris belonged to her, so when I noticed how thin he was I asked her when he had last been fed. She said he belonged to the neighbors who moved, but another neighbor told her Morris stayed behind because, “Kim said he didn’t want to go with her.”

This so-called Kim also gave away her dog, too, so I doubt very much Morris put up a paw and said, “You know, I’m good. I’ll just stay here and scavenge.” I think Morris got left behind and I told the woman as much. Since I knew she had cats (she told me all about her pets), I asked her if she could feed Morris until I came back the next day to meet with the new homeowners. If they knew nothing about Morris, I would make arrangements for his care. The new owners weren’t at home last night or I would have given them the guilt trip then.

Then she said he cries all the time, and maybe he’s lonely. I said, maybe, but maybe he’s also really, really hungry because I know those neighbors moved two weeks ago. If the Mister and Mikey weren’t so allergic to cats I would have taken Morris home to live a life of luxury. Stupid allergies!

We agreed I would come back Friday with food and help so Morris didn’t starve. [Pointed stare.] I turned to walk home and didn’t get 10 feet before Morris came trotting after me mewling the whole time. I felt my resolve wavering. And, yes, I also felt smug because the neighbor looked shocked and a little bit jealous. She called Morris back and when she did I asked her (nicely) if she was going to feed him because otherwise it wasn’t fair to call him over and then go inside her house. Morris stood between us like a kid at a custody drop off.

She said she wasn’t going to feed him because blah blah blah coyotes and in my head I said THAT’S IT!

I gave Morris a whistle and called out his named (I’m a dog owner of over 30+ years–I have no idea what I’m doing with cats), but he came and heeled. Then he followed me the mile home. At one point I passed a group of kids playing and one boy stopped what he was doing and said, “Whoa. Lady, are you walking your cat like a dog?”

“Kind of!” I said. Then I called the Mister and asked him to go across the street and borrow cat food from the neighbor because I kind of was bringing home a cat because I had no choice. Morris was starving and he was following me and he needed us.

“Technically, I’m not bringing him home. He’s following me, so really it’s like Morris made the decision for us.”

“I’m telling you, he’s following me like a puppy dog. My hands are tied.”

When I got home he was still the opposite of pleased and there was no cat food because he was “busy cutting a pineapple.” No matter! I went across the street, got the food, fed and watered Morris, and showed him to the boys. Nico immediately fell in love. Mikey hid behind the door until I confirmed he would not go into anaphylactic shock, but then he fell in love. They fell in love because Morris is lovable. I called the Mister outside to “look at how skinny the poor thing is!” and he did, briefly, before giving me a look that said I brought home a cat. Then he went inside to cut more pineapple.

After the Mister finished cutting the world’s most important pineapple, he went outside to toss out the trash. I heard him talking to Morris and instead of scaring him off, he made sure he didn’t get trapped in the garage as he shut everything down for the night. When the dogs went outside and started barking at Morris, he had the boys bring them back inside. I looked at him and smiled.

He scowled and said, “We do not have an inside cat!”

This is Morris. I don’t know who he belongs to, but I’m hoping it’s us. We all know the decision is up to Morris.