This week: whaaaaa? I’ll get there in a minute. First, let me explain the title of this post. It’ll take me one minute. 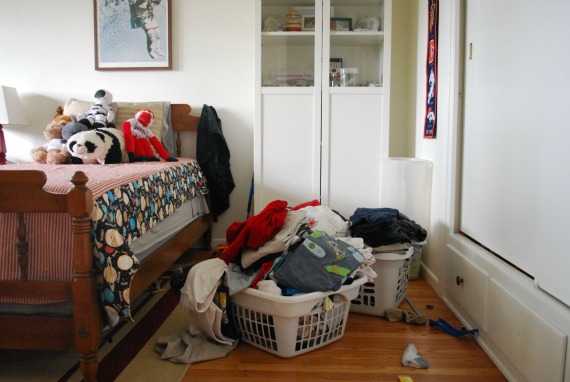 The pictures in this post reminded me of the cover of this book. The colors are happy, and there is childhood innocence involved, but the main adult is crazy.

Those two baskets of laundry sat unemptied for 10 days. Allow me to be specific. They sat unemptied in the boys room for 4 days. They sat unemptied in the family room for 6 days. So, total, 10 days. And it was really inconvenient for a host of reasons, not the least of which that because they were so packed with clothing, Nico couldn’t neatly rifle through them for clean shorts. So every morning for band camp he would come out wearing fleece lined ski pants and flip-flops, and every morning I would tell him to put on shorts. His reply was always the same.

“But, mama! I don’t have any shorts in my drawers! This is all I have!”

And I would get up and help him find shorts but in my head I’d be like, hey! Way to throw mama under the bus, because this exchange always, always, always happened when the Mister was doing something useful and within listening distance.

I said it was because–and this was the truth–I knew I had to purge the boys clothes first and I didn’t want to do it. Besides, the laundry hadn’t been out that long.

“It’s been sitting in the family room for 10 days.”

“For almost a week! That’s still 10 days. You’re just procrastinating and making it a bigger job in your head than it really is.”

“Um, excuse me? I don’t want to have to throw numbers at you, but 4 out of those 10 days I had a migraine, so I couldn’t have put away the laundry even if I wanted to. Therefore, I only procrastinated 60% of the time. The other 40% doesn’t count, so it’s like I’m procrastinating half as much as you think I am.”

“There it is! There’s that law degree!” 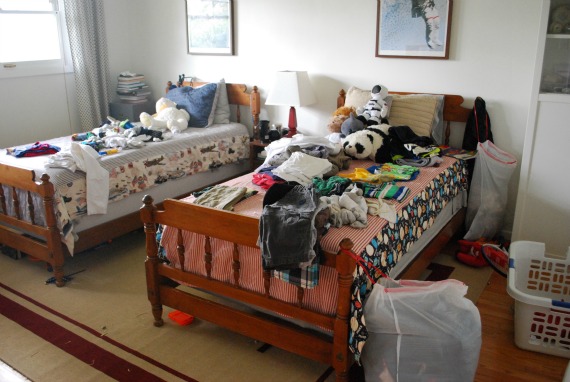 I did purge the clothes and put away the laundry, though I waited until the next day just so everyone was clear I wasn’t admitting guilt. It wasn’t that bad and went faster than I thought it would (no comment). I thought that would be this week’s post.

But then! Then! The Mister went out of town, as expected, and I planned to watch movies all week long. I even had him buy something for the modem for Apple TV/Netflix so they download faster zzzzzzzzzzzzzzzzz I have no idea. I just asked him to please make it work better and he did. 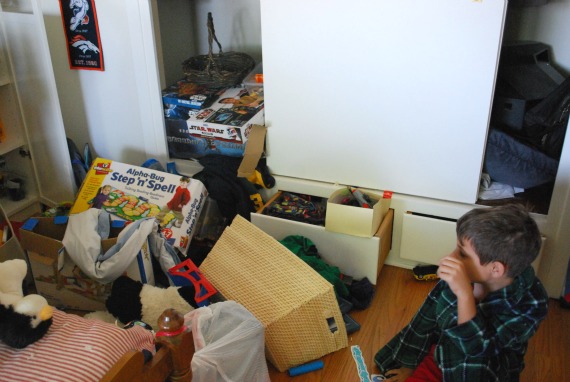 On Monday I found out a neighbor’s home was burglarized. This was not what I wanted to hear because (1) I was home alone with the boys and would be home alone for the rest of the week and (2) this was the 4th such burglary I heard of, and one of the others happened to a close friend of mine who lives less than a mile away. On Monday night I was freaking out about this on Facebook when another friend told me that an actual home robbery happened that day, again less than a mile from me, and that a few days prior someone tried to break into her house late at night. Clearly, something is up.

That something turned out to be my paranoia. 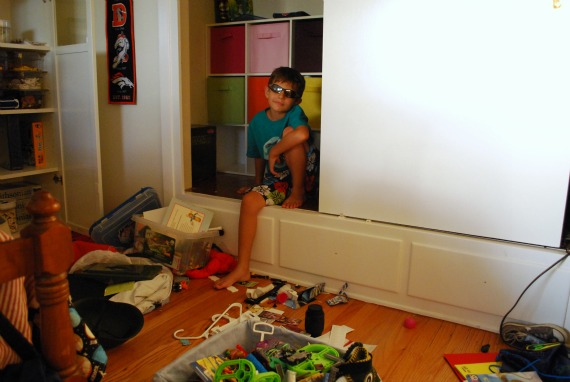 I couldn’t watch TV because I was way too nervous. Because the burglaries/robberies were happening morning/noon/night (one neighbor was the morning, the other neighbor the afternoon, and my friend at night) I decided to download a romance novel from an atrociously predictable author (seriously, everything she writes is the same and comforting in its predictability and awfulness) and stay up all night reading it with a hammer next to me. You know, for self defense.

Go ahead and laugh, all my friends did when I told them.

Then, I started thinking (after I went a night without sleep) that if a “bad guy” were to break in, the boys would have to hide while I defended the castle. The best place for them to hide would be their cavernous closet, but it is so stuffed with toys that they would never get in there without making a racket and blowing their cover. So, naturally, the only logical thing to do this week was to clean out their closet and create a hidey-hole.

Hand to Bible, this sounded perfectly sane on Tuesday. Of course, I also put a foil wimple on my cough medicine when I was tired.

It only gets better from here.

On Tuesday night I told the Mister that I and my hammer were going to sleep on the couch. “Why?” he asked.
After I rolled my eyes (Geez, this guy is so slow!) I said, “Well, obviously because the couch is centrally located so if anyone breaks in I can hear them right away and then they have less of a chance to sneak up on me. I mean, what if someone breaks in through the kitchen but I’m in the bedroom? I might not hear them as fast as I would if I was on the couch!”

(Duh! That’s why I have the law degree!) 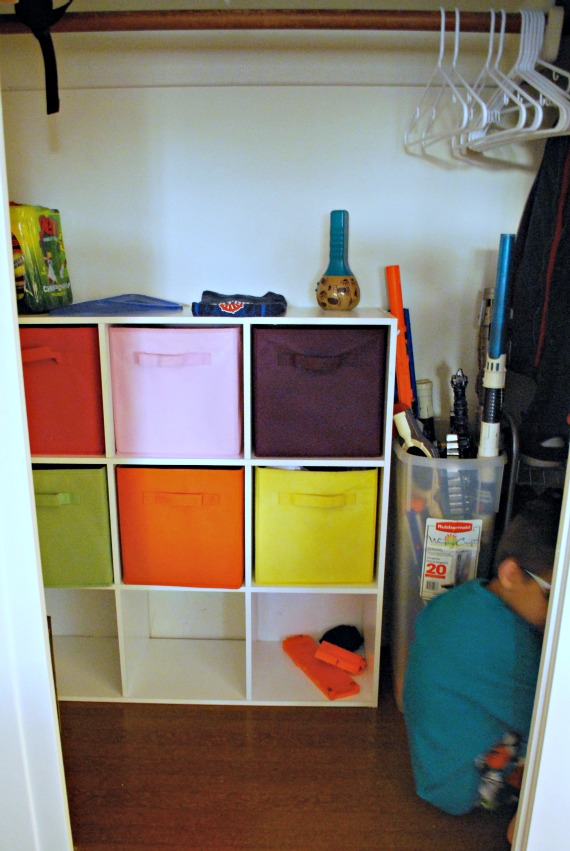 Later, as I was changing into my pajamas, I looked at my soft and comfy bed through the eyes of someone who had not slept more than 3 hours and reconsidered the brilliance of my plan to sleep on the couch. So I downloaded yet another book from the same author and put on my usual camisole/tank dress pajama thing. Then, it hit me. A camisole/tank dress pajama thing is not something I want to wear in hand-to-hand combat with my hammer by my side. So, again relying on my infallible logic, I put on yoga pants and a tight fitting work out tank top. I needed something comfortable enough to sleep in but athletic enough for me to do roundhouse kicks, flips, and karate chops at a moment’s notice. I almost put on a sports bra, but I realized that was a little crazy. (A little crazy! Everything else? Totally sane!!)

That night I didn’t last past 2am, and when I woke up 6 hours later I felt like Rip Van Winkle waking up from a nap. Six hours of sleep after no sleep is like the first pumpkin latte after a long, hot summer. I could have conquered the world with one hand and live-tweeted it with the other. 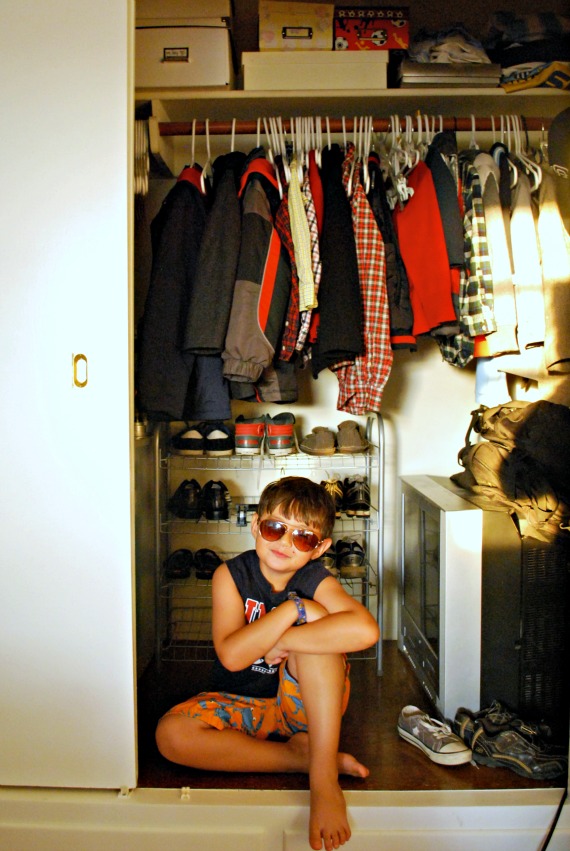 I may have realized the hidey-hole wasn’t critical at that point, but I was too far into the project to stop. The boys and I kept at it and finished a good portion of the closet. We were able to move in an old storage cubby and shoe rack, and sometime this weekend we hope to organize the remaining odds and ends that we stuffed in a basket. 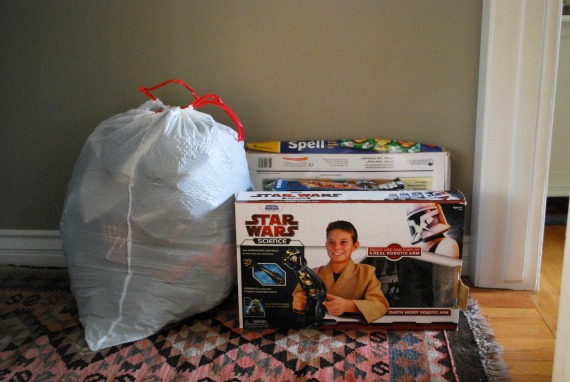 For now, we have two bags of clothing and a stack of toys heading off to Goodwill and my craziness has almost resolved itself. I say almost because I’m still researching German Shepherd rescue organizations.

This post was part of The William Morris Project, a weekly series that details the steps I am taking to create an intentional home. You can see more of my goals and completed projects here. To learn more about this project, start here.

Now its your turn! Feel free to share how you have lived according to the William Morris quote, Have nothing in your houses that you do not know to be useful or believe to be beautiful. Made a plan? Cleaned a drawer? Bought a sofa? Tell us about it with a link or comment. A few guidelines: