It’s as simple as this: Mikey has a set of brass balls. Where Nicholas is sweet and shy and clumsy and lovable, Mikey is honest and confident and sure and memorable. When he sees something he wants, he doesn’t stop until he has it in the palm of his hand. He assumes he will be good at everything and when he isn’t, it comes as a shock. He is so used to overachieving that when he falls short of the mark he makes excuses. I don’t say this to criticize him. I say this because he’s my son and I love him, but I’m not one of those moms who believes her child is perfect. I also say this because the apple doesn’t fall far from the tree. 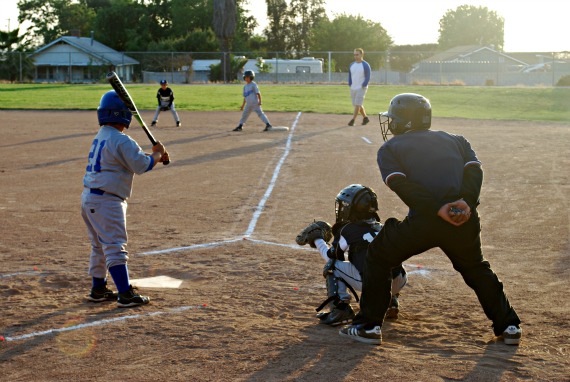 Mikey inherited my drive for perfection. Last week I hung in the laundry room some of my favorite drawings the boys have made over the years. Nico doesn’t draw as well as Mikey did at his age, but if you ask him everything he does is brilliant. When he saw his pictures, he immediately pointed out everything that was awesome–and there was plenty of awesome. When Mikey saw my wall of pictures, he grimaced. This one, my favorite of the bunch, really annoyed him.

Days later he saw it again as he was putting his baseball uniform to wash. He came storming back to my desk to complete his argument (I refused to take down the pictures days prior). “You know what really bugs me about that Allosaurus picture? It’s attacking a Triceratops, which is impossible. They aren’t even from the same period.”

I reminded him that (1) we don’t know any paleontologists so his gaffe is safe with us (2) he was barely 7 years old when he drew that picture and if anyone is allowed to take poetic license with dinosaur art, it’s the under-10 crowd and (3) too bad, so sad, I love the picture and it stays.

Baseball has been another lesson in perfectionism.

Mikey is now in the age group where the boys who play baseball are serious about the game. They play winter ball, participate in camps, and tour on tournament teams. Mikey has only played spring season baseball three times, and he doesn’t practice outside team practices. That has always worked in the past, but it hasn’t this year. This year, there was a great divide when it came to skill sets. All those camps and off season teams everyone else participated in caught up with Mikey and left him as one of the weaker players on the team. Weak was new for Mikey. New and unwelcome.

For the first few weeks of baseball, practice was a stressful affair. He came home quiet, sometimes angry. He didn’t like getting his lunch handed to him. Even worse, he didn’t like the ribbing he got from his teammates. A few of them let him know he wasn’t the best player. Mikey let them know what he lacked in fielding he made up for in tackling. We had a family meeting that night.

There was one bad night where Mikey came home from practice, walked right past me, and went straight to his room. I found him laying on his bed, still in his dusty practice uniform. I sat on his bed and asked him if he was okay. He rolled over and looked at me with pretty blue-green eyes and said, “I suck at baseball.” 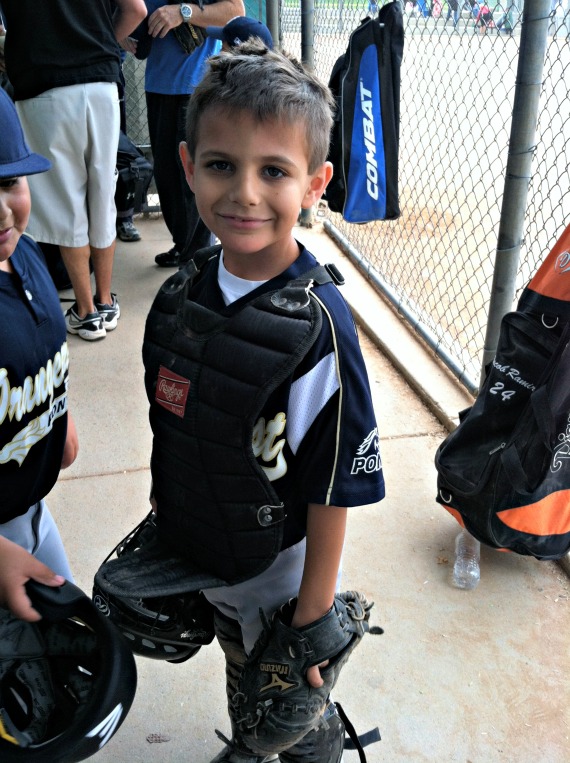 My first thought was that we should call the league and have baseball cancelled forever. After that, a quick call to the school principals of all the boys on the team to let them know they all deserved F’s on every core subject on their report card. In the end, I decided to go less Mama-Bear and point out the obvious. If he wanted to be as good as the boys on his team, he was going to have to practice as hard as they do. He’s at the level where good performance requires effort. Talent doesn’t flutter down into your lap like leaves from a tree during autumn so…it was time to think about winter ball, baseball camp, and all the other stuff the boys on his team do if being good at baseball was what he really wants. If he didn’t want to play baseball anymore, that was okay. This could be his last season. But if he wanted to keep playing, no more excuses or complaining without putting in the work.

He didn’t like that idea. He liked the idea of natural greatness. Yeah, well, so do a lot of people. But if the boys on his team proved anything, it’s that talent rarely comes naturally. We went round and round until he admitted that the idea of camp made him nervous (“You don’t understand, mom. There’s going to be 11 year-olds there.”) and that he was afraid of the unknown. I tried to give him some parental advice on fear, but I missed his hints on backing off in my zeal to be super positive Mom of the Year because he stopped me mid-soapbox and said, “Mom, I’m tired, in a bad mood, and feeling like being a jerk. Can we talk tomorrow when I’m in a better mood?”

I said yes, sure, of course, and that I was proud of him for being honest and that when he was ready to talk I was available and he said, “MOM!!” and then I left his room quickly. 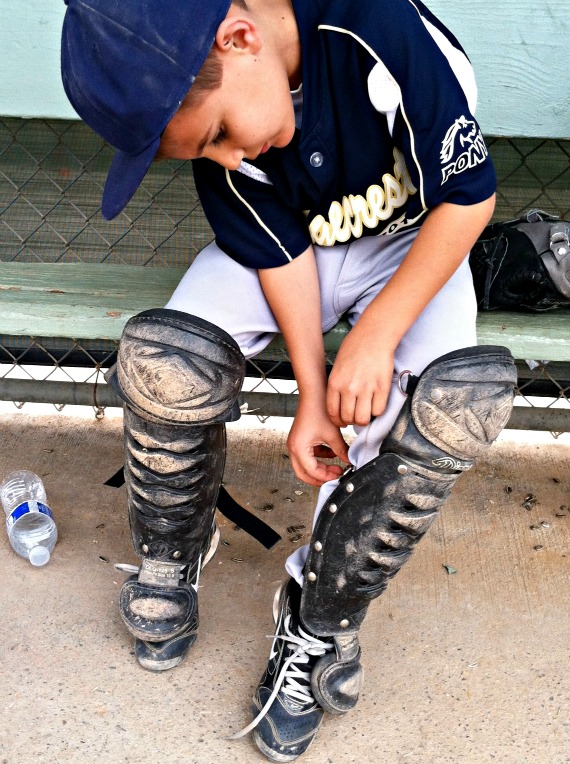 A few days later I decided to bring it up again but he waved me off. “Oh, I thought about it when I woke up the next morning and I told dad I’m going to do the baseball camp.” 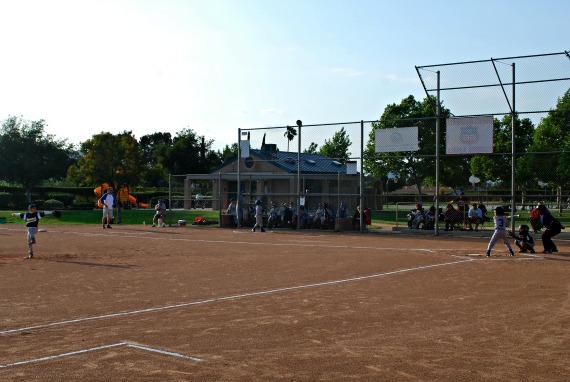 It’s why he was excited and not nervous when during a recent game the coach put him in as catcher even though he is a horrible catcher. The team was so far past winning the coach tossed Mikey a bone, which he attacked like a terrier. He didn’t catch a single ball, but he had the time of his life.

The next game, we played a team so bad we knew going in we would win. The coach tossed Mikey another bone and made him the starting pitcher. Mikey was thrilled; I was horrified, but played it off. At the beginning of the season, Mikey couldn’t throw the ball over the plate. He pitched one inning and struck out one batter. Then, at the end of the game he played catcher. This time, his second time playing catcher this season, he caught balls and fielded well. He had the best game of his life and did better than some of the top line boys, probably because he believes failure isn’t a threat. A possibility, maybe, but not a threat. 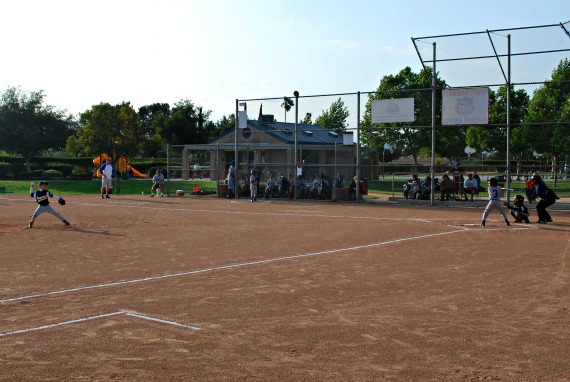 When we drove home from the game I asked him if he was nervous on the mound and he said not at all. “Not even when you were throwing balls? You didn’t get nervous when you threw a ball and had to pitch again? I would have been nervous to throw another ball.”

“No way, Mom. Even the best pitchers throw balls.”

Parenthood is hit and miss, but recognizing your child has inherited some of your good while avoiding most of your bad is a hit. So is the realization that you learn from your child more than they learn from you.

« Gosh, Whatever Will I Blog About Today?
The Curtains »