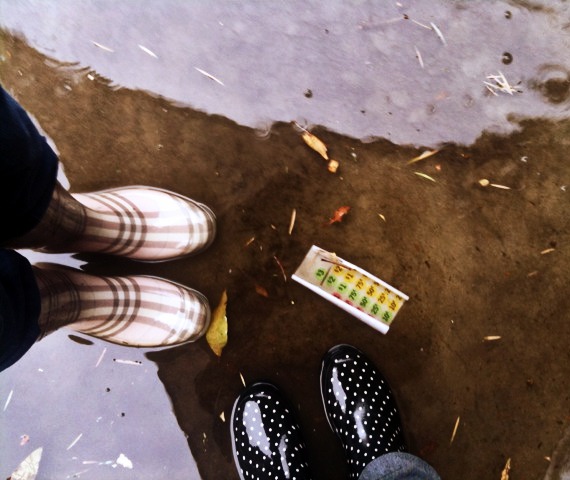 On Friday I pulled back the curtains in the kitchen, peered at the pouring rain, and called Helena. The rain wasn’t a surprise. Weather reports predicted our windy week would end wet. By silent agreement, discussions of weather were verboten. Lips sealed. But this was Friday, the first day of Helena’s epic three-day estate sale. I thought the rain deserved at least a mention. She answered the phone on the first ring.

I watched three leaves ride a wave down my driveway and into the gutter. “Okay, so we’re ignoring the rain?”

“It’s not raining. And we have tarps.”

I thought about how hard Helena worked since August, surrounded day in and day out by memories and waste, and thought about what the next three days meant to her. “You’re right. It’s not raining. I’ll be there as soon as I can.”

Two hours later I was standing under an umbrella, tipping collected rain water out of a silver-plated chips and salsa bowl. It sounds miserable, but it was the opposite. Everything was peaceful and quiet, and I took advantage of my unusual circumstances. Adults are rarely allowed the luxury of standing in the rain for long periods of time without a destination in mind. Work, school, errands, kids–something is there to command your attention. Not me. My biggest job was to make sure no one stole the pots and pans.

Helena and I eventually met in the middle of the flooded driveway. She held my umbrella so I could wring out my bangs. We stood there for a while in the rain and watched strangers paw her parents’ possessions. I wiped the running mascara off my face as well as I could without a mirror and looked up at the pouring rain.

“Dude. Your mom is pissed.”

Then we laughed and made jokes and took pictures of our feet in 3″ of standing water.

I worked half day on Friday and all day (7:30-4:30) on Sunday. It was a 13 hour educational experience. My favorite! Some things I learned:

I had six friends who don’t really know Helena come out and show support by shopping and volunteering their time. Most of them drove an hour one way to get to her house. I was touched and overwhelmed by their generosity. The kindness wasn’t limited to my friends, either. The people who realized the decedents’ daughter was handling the sale immediately gentled their tone and were more respectful of the house and its contents. One woman came back with a condolence card. Many turned around and called their friends to help spread the word and the price haggling stopped.

The rain was nice. My friends are nice. People are nice. Not the girl who doesn’t care about the future of at risk children. May she trip on her new spectator pumps and land in a puddle of beloved animal excrement.