We had the most amazing Thanksgiving break. You can see much of it on my Instagram feed, which has slowly morphed into a blog for me. It’s easy and forces me to be brief. Maybe too brief, because I’ve been away from the writing habit long enough that I’m having trouble formulating my thoughts.

What I loved about our Thanksgiving break: the birth of my new niece, Charlotte; sleeping in; the cool weather; family activities; playing outside; the Mister being home. Nothing extraordinary, but all of it wonderful. Our decision to make it a limited TV/video game/device break played a large part. 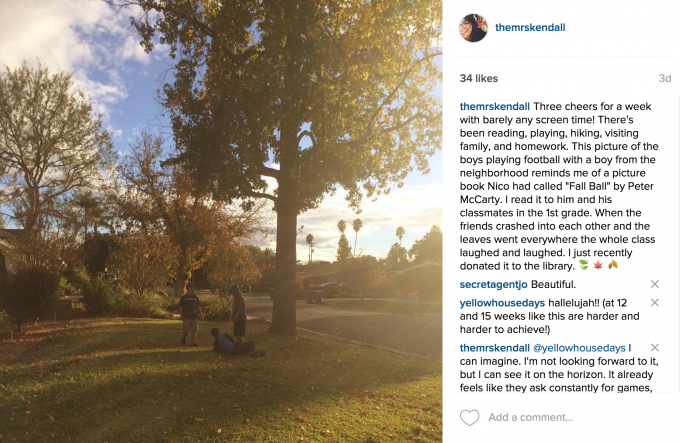 Three cheers for a week with barely any screen time! There’s been reading, playing, hiking, visiting family, and homework. This picture of the boys playing football with a boy from the neighborhood reminds me of a picture book Nico had called “Fall Ball” by Peter McCarty. I read it to him and his classmates in the 1st grade. When the friends crashed into each other and the leaves went everywhere the whole class laughed and laughed. I just recently donated it to the library. 🍃🍁🍂

Twice in the last month we caught Nico in a lie. Both times he was supposed to be in bed, but was really playing on my old iPhone. It’s important to note that we don’t allow video games or TV during the week, so what he did, while not capital murder, went beyond staying up past his bedtime without permission. The second time we found him playing on the phone was right before the break; we immediately took away the privilege of video games and devices for the entirety of his vacation. In essence, this put Mikey on restriction as well, but we didn’t lose sleep over it because he had homework in at least one subject, his science fair project to complete, and academic decathlon work (he’s on the current events team). We wanted him outside in the fresh air after all that book work.

With Nico unable to watch TV or play video games, the house was quiet. Mikey completed his projects peacefully and without distractions in record time, while Nico worked on puzzles, drew pictures, built Legos, and read Goosebumps. When Mikey finished all his work, he joined in on Nico’s fun. When they got bored, I told them to go outside and play.

Within a few minutes, all the neighborhood kids were over. Not long after that, they ”invented” Land Boat Racing. 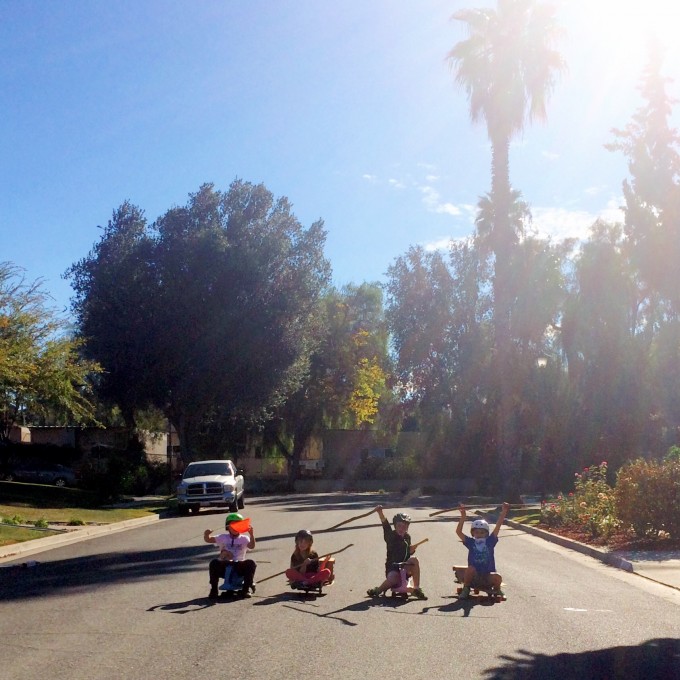 Land Boat Racing, according to the kids, is when you take skateboard or kiddy pedal car and attach to it a cardboard seat you make out of boxes you find in your parents’ garage. Then, using large sticks you gather from the neighbors’ yards, you row yourself down the street. If you ask the Mister and his brother, the “true” inventors of Land Boat Racing in the 70s, you’re supposed to balance a lawn chair on a skateboard and then find a hill. Helmets? Not in the 70s!

The kids also played a ton of football and basketball. Nico got busted trying to swing from our tree. They came inside when the street lights came on. It was the vacation our family needed, and it was wonderful.

What I noticed more than anything was the absence of petty fights and drama. The boys aren’t allowed to play violent video games, but I swear even Minecraft winds them up and makes them short tempered. Their personalities change. They fight over stupid, stupid stuff. They have trouble sleeping at night and get up early to get in more game time. They don’t eat well, either nibbling at their food so they can get back to playing faster or waiting until they’re starving to eat.

We went without cable for years until recently because the Mister wanted to watch football with the boys. Reconnecting the cable was a mistake. Now all the boys want to want to do is watch football and Cartoon Network. Then they imitate what they see, and what they see is rude and lame. 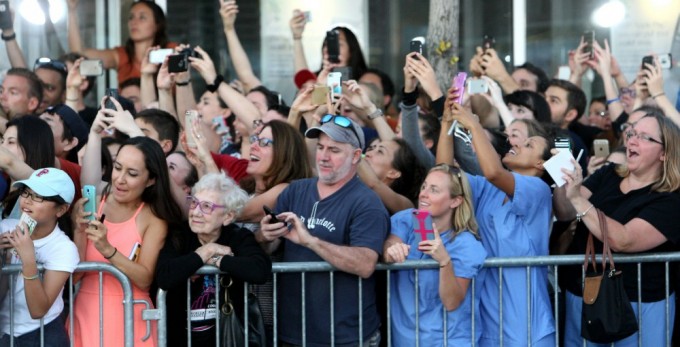 The thing is, I’ve been down on kids and devices even before our break. I was aware of the differences I see in the boys and haven’t know what to do about it. Then, I saw Being 13: Inside the Secret World of Teens and dropped my head in my hands. If you haven’t watched this special yet, I highly recommend you make the time to do so.

I’ve talked to 3 or 4 moms of children older than mine since I watched that special, and they all said the same thing: if they could do it all again, they would delay giving their kids devices of any kind. These are all mothers I respect, mothers who don’t know each other, and all these conversations (1 email, 3 in person) happened separately and without one knowing about the others. They believe once you start, it’s hard to pull back; monitoring use becomes difficult and time consuming; parental controls are a joke and can be circumvented easily.

How can we as parents do this, though, when all the schools are switching to iPads? Or how can I demand this of the boys if I do everything on my phone? Take today, for example, which was my birthday. My mother and two brothers called me. I also received 63 messages on my Facebook wall, 12 texts, and 4 emails.

The Mister and I realized that if we want to raise the boys differently, we need to be the first ones to change. We’re not sure what that entails because not all technology is bad! I love writing here, love the internet, love the people I have met online, and love my corner of Instagram. To flounce from the internet is out of the question. Please, everyone comes back, if only for the cute animal videos.

As usual, I’ve been thinking, reading, plotting, and trying to come up with realistic, long term plans. I’ll share them as they become more concrete. Selling everything and moving to a yurt in New Mexico is tempting, but not likely. Living a life without electronics sounds lovely; so does Utopia. Neither one is going to happen. (But wouldn’t it be something?)

In an effort to speed up the navel-gazing process, I’m hoping you’ll share your thoughts on kids and electronics so that together we can come up with a workable solution that doesn’t throw the baby out with the bathwater.

« Coffee Nut Smoothie
River (and a few others) »