Score 5 out of 5 stars
Everything, Everything by Nicola Yoon
Genres Young Adult

My disease is as rare as it is famous. It’s a form of Severe Combined Immunodeficiency, but basically, I’m allergic to the world. I don’t leave my house, have not left my house in fifteen years. The only people I ever see are my mom and my nurse, Carla. But then one day, a moving truck arrives. New next door neighbors. I look out the window, and I see him. He’s tall, lean and wearing all black–black t-shirt, black jeans, black sneakers and a black knit cap that covers his hair completely. He catches me looking and stares at me. I stare right back. His name is Olly. I want to learn everything about him, and I do. I learn that he is funny and fierce. I learn that his eyes are Atlantic Ocean-blue and that his vice is stealing silverware. I learn that when I talk to him, my whole world opens up, and I feel myself starting to change–starting to want things. To want out of my bubble. To want everything, everything the world has to offer. Maybe we can’t predict the future, but we can predict some things. For example, I am certainly going to fall in love with Olly. It’s almost certainly going to be a disaster.

There is a face + hand motion + word combination I make when I’m annoyed and feeling superior. It makes one of my best friends laugh whenever she sees it. She claims it’s because she knows exactly what I’m thinking but I know the real reason is because I look a chubby Kermit making a scrunch face. I made Kermit Scrunch Face several times while reading Everything, Everything. 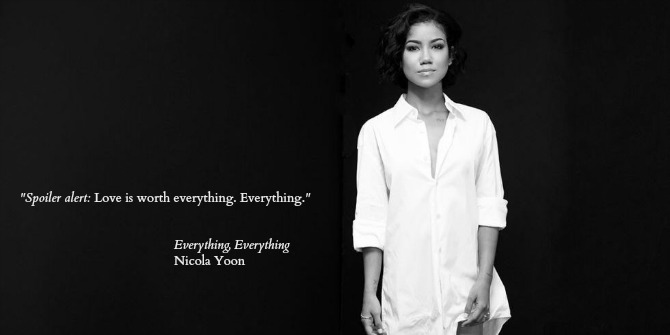 Everything, Everything by Nicola Yoon is one of the young adult buzz books for fall 2015. It certainly managed to insert many of the hallmarks of previous young adult buzz books. There’s terminal illness, plot twists, socially awkward yet remarkably well spoken teens, difficult parents, star-crossed lovers, and the intense rush of first love.

Any of the above is cause to bring on an extreme case of Kermit Scrunch Face. Despite that, it’s a book I would recommend to fans of young adult fiction, especially the 8th grade girls whose parents okay’d The Fault in Our Stars (they have similar levels of sexual content). I wish the book didn’t have that one sex scene (mild, tastefully done) because it’s a book I would love to carry in the library. Diocesan rules are real.

The primary reason Everything, Everything is so worth reading to me is its excellent treatment of diversity. When I read that Madeline, the main character, had brown eyes, I read the sentence twice to make sure I read it correctly.

How sad that a main character with brown eyes took me by surprise.

You can imagine my reaction when I read Madeline was half-Japanese, half-African American. I was thrilled, especially when her heritage was treated as a nonissue. She explained her race (in an online chat) the way one would disclose their favorite book: like it’s just another piece of trivia. Olly, the cute boy next door, wanted to know what the “F” in Madeline F. Whittier stood for.

Olly: i was going to email you back, but saw you were online. your recipe cracked me up. has there ever been a spy in the whole history of spying that’s admitted to being a spy? i think not. i’m olly and it’s nice to meet you.

Olly: what’s the other half?

Madeline: I don’t have a nickname. Everyone calls me Madeline. Sometimes my mom calls me honey or sweetie. Does that count?

Olly: no of course it doesn’t count. no one calls you m or maddy or mad or maddy-mad-mad-mad? i’ll pick one for you.

I don’t care if your black, brown, green, or purple. I’m concerned that you don’t have a proper nickname.

Other things I loved: 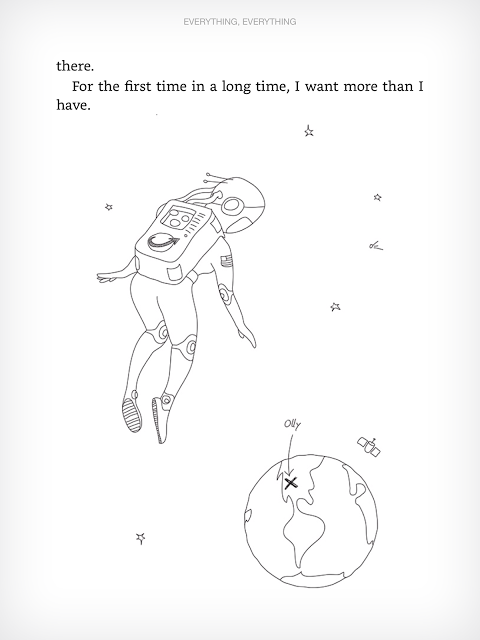 What I didn’t love:

Conclusion, because this review has gone on long enough: I would normally give this book 3-3.5 stars. given the previous addressed Kermit Scrunch Face triggers. In fact, originally I did. I changed my mind the more I thought about how rare it is to see a person of color as a main character without race being part of the story. We need diverse books! Also, this picture of Nicola Yoon, her husband, David, and their daughter. It wins the internet and is the only known cure for John Greenitis.

« The Casualties by Nick Holdstock
The Fine Art of Negotiation »