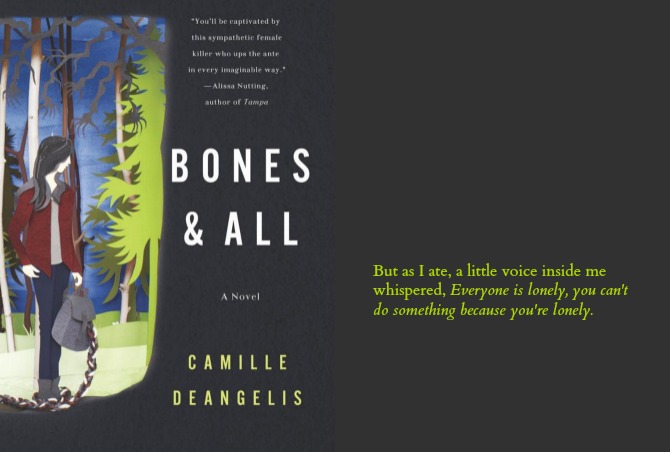 Before the end of the second page you’ll know whether this grotesquely beautiful coming of age story is one you can read.

Penny Wilson wanted a baby of her own in the worst way. That’s what I figure, because she was only supposed to watch me for an hour and a half, and obviously she loved me a little too much. She must have hummed a lullaby, fondled each tiny finger and toe, kissed my cheeks and stroked the down on my head, blowing on my hair like she was making a wish on a dandelion gone to seed. I had my teeth but I was too small to swallow the bones, so when my mother came home she found them in a pile on the living room carpet. The last time my mother had looked at Penny Wilson she’d still had a face. I know Mama screamed, because anyone would have. When I was older she told me she thought my babysitter had been the victim of a satanic cult. She’d stumbled upon stranger things in suburbia.

It wasn’t a cult. If it had been, they would have snatched me away and done unspeakable things to me. There I was, asleep on the floor beside the bone pile, tears still drying on my cheeks and blood wet around my mouth. I loathed myself even then. I don’t remember any of this, but I know it.

Even when my mother noticed the gore down the front of my OshKosh overalls, even when she registered the blood on my face, she didn’t see it. When she parted my lips and put her forefinger inside— mothers are the bravest creatures, and mine is the bravest of all— she found something hard between my gums. She pulled it out and peered at it. It was the hammer of Penny Wilson’s eardrum.

DeAngelis, Camille. Bones & All: A Novel

Maren is a teenager with a problem she can’t control. She is an eater–a cannibal, a ghoul, a monster–and she was born this way. Her hunger is insatiable, but not constant. Maren feeds on love; she will gobble you up if you show her the smallest bit of affection, bones and all.

On the morning after her 16th birthday, she wakes up alone.

I came down the hall and found a note on the kitchen table:

I’m your mother and I love you but I can’t do this anymore.

DeAngelis, Camille. Bones & All: A Novel
She is an eater–a cannibal, a ghoul, a monster–and she is alone. With nothing else to lose, Maren packs her belongings and sets off to find the father she suspects is just like her. Along the way she discovers eaters who feed on power, knowledge, peace, and more. What she doesn’t anticipate finding is self acceptance.
This is philosophical horror done perfectly. As readers we are compelled to explore our conscience and determine whether our actions align with our values. I suspect DeAngelis, a vegan, was making a statement on the political, spiritual, and ethical ramifications of eating animals and their secretions, but other reviewers have called it an exploration of female power and sexuality. The best books allow you to draw into the narrative your personal line in the sand.
Using a deftly crafted mix of horror and profundity, DeAngelis created in Bones & All a book that is macabre, astute, and infinitely readable.