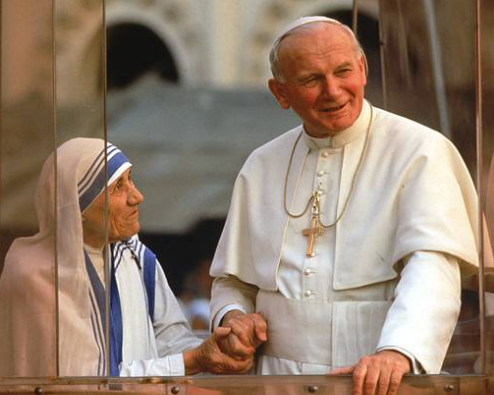 We are watching the best DVD series as a family. It’s called Catholicism, though so far there hasn’t been anything overtly Catholic. The cinematography is excellent and in high definition. This is a professional production that took over 4 years to film and edit. Not only is it beautiful, it’s also thoughtful and Father Barron makes the theology interesting and easy to understand. Shocking, I know!

The first video dealt with the Beatitudes which, if you aren’t familiar with the gospel of Matthew, are as follows.

They seem impossible to me several times per week, especially the one about being meek, but Fr. Barron explained it in a way that even I could understand. Paraphrasing poorly: stand up for yourself, but with quiet dignity. He gave a great example of Mother Teresa doing just that.

I would have spat back.

The next day, I got to put my Mother Teresa in action.

The boys and I pulled into Starbucks at 7:15 am, which is very late for me. I need to clock in at 7:30, so I didn’t have time to mess around. Mind you, I could have just skipped the coffee. Hahahaha! NO.

I took one look at the drive-thru line and decided to go inside, knowing it would be quicker. Not much quicker, I discovered, because the line was long. I spent my time standing behind two high school girls, occasionally hearing them mumble about some outrageous and insulting and ohmygodcanyoubelieveher text. Really, my attention was focused on the aggrieved student’s fake nails. She had bright red, long acrylic stiletto nails (not a fan) that she clicked and clacked across her phone as she searched for teen injustice.

Time went on. We waited. The line moved.

We were two customers away from service when a 3rd high school student came in. She walked up to the other girls and said something to one, who then turned around and looked at me with an awkward smile. In retrospect, The Girl Who Smiled had the subtlety of a 3-legged dog on stilts, but at the time I was worried about being late.

Do you see where I’m going with this?

The two girls kept talking, and the 3rd girl hovered outside the conversation the way you do when you’re waiting for your moment to jump into a game of double dutch. She wasn’t excluded, but she wasn’t included, either. Stiletto Nails didn’t acknowledge her.

Time went on. We waited. The line moved.

Finally, it was time for The Girl Who Smiled and Stiletto Nails to place their order. I noticed the 3rd girl had moved slightly behind them, as if she were in line.
I made a move to go around her so I could place my order. She gave me a quick glance and moved in front of me, blocking me from reaching the register.
In the words of 4th graders across the nation: Was she trying to cut?! I decided to confirm my suspicions.
“Surely you didn’t just jump in front of me in line.”
And then she said, barely looking at me, “No, I’ve been here the whole time with my friends.”
This girl, I thought, is a liar and has an enormous set of clanking balls on her.
I said nothing. I did laugh out loud at her impertinence, but I decided in the spirit of the Beatitudes to let her order her iced coffee and let it go. Karma, etc. etc.
Then she placed her order, which was breakfast and three different specialty drinks, including one that had, “extra whip cream, like a lot. Like, a lot, a lot of whip cream. Can you do that?”
One drink, fine. Three specialty drinks and breakfast means we’re going to have a problem. I could feel my hackles rising. 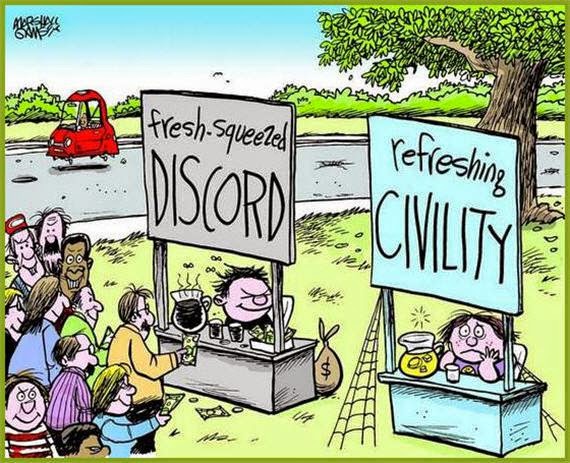 Beatitudes. Beatitudes. Beatitudes. Quiet dignity, Jules. Quiet dignity!
I walked up to the counter and placed my order. Then I asked, nicely, if they would put my order ahead of the girl who jumped ahead in line since the line had been long and I was running late. The barrista said she would do so gladly. “Kids,” she said rolling her eyes.
I was proud of myself for not resorting to sarcasm and pettiness. I’m practically Mother Teresa, I thought. That video is great! I learned so much! Catholic points to me! Where’s my halo?
“I have an order up for Jules.”
Well, well, well. Not only did they move me ahead of Clanking Balls, they also moved me ahead of The Girl Who Smiled and Stiletto Nails! This is what quiet dignity gets you.
As I walked up to grab my coffee, I couldn’t resist a look back at Clanking Balls. There she was, morose and shifting from foot-to-foot as her misappropriated balls shriveled in time with her ego.
I gave her a wide, self-satisfied smile and saluted her with my iced coffee. I might have winked and encouraged her to have a marvelous day and enjoy her coffee with a lot of whipped cream.
Later that night, I recounted my graciousness.
“I’m practically Mother Teresa,” I told the Mister.
“I’m not sure that’s how she would have handled it,” he said. “She would have skipped the coffee salute and sneer.”
“Well, sure, that last part was a little dicey. But I said I’m practically Mother Teresa. I still have room for improvement.”
“Just a little,” he said.

« The Mom Moment
New Books in the Library »