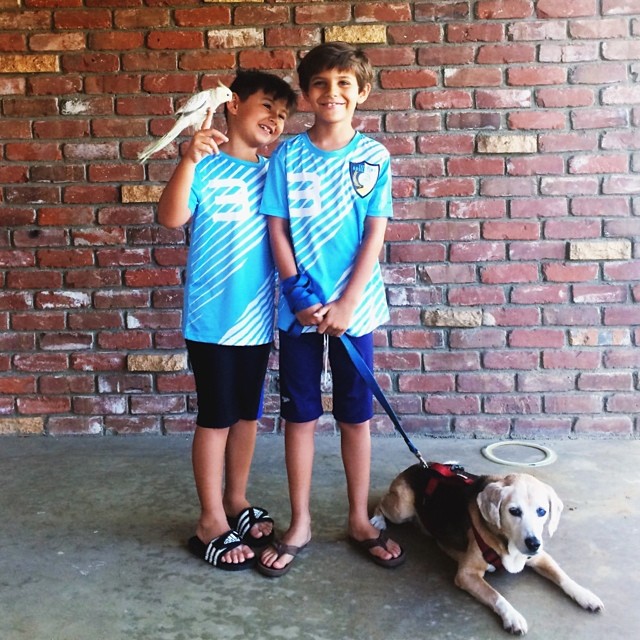 I walked a few days last week, but I spent the majority of the time wrapping books, decorating the library, and painting the 4th grade classroom. Since I can sum up a week like that in one sentence (see above), I thought I’d talk about kids and how they can inspire action.

Immediately after bringing home Buttercup, Nico stopped eating chicken. Shortly after that he stopped eating beef, and not long after it was pork. Now we when go to restaurants he says, “I don’t eat cows or birds or pigs.” He eats veggie burritos or tacos at Mexican restaurants, burgers or sandwiches without the meat at casual dining spots, tofu stir-fries at Chinese restaurants (we’ve only been once because Mikey and the Mister don’t like Chinese food), and his favorite pizza is pineapple and onion.

People think it’s cute, but they think it’s just the whim of a 7 year old boy. Even I wondered about the strength of his dedication when we went to my mother in-law’s house. But he turned down her pot roast, which he loves, and when we asked him if he wanted gravy (true test) he said no because “gravy is made from cows.” He looked at us like we were dimwitted for not putting together the beef gravy = cow-thing.

Nico will occasionally eat fish. Dairy is a no-go unless it is an accent and even in tacos and burritos he asks for no cheese/sour cream.

Mikey says he doesn’t have what it takes to be a vegetarian.

Cooking to appease both boys has been challenging. Already I’m getting well-meaning advice from family and friends. Don’t let him eat soy. Don’t let him eat too many carbs. Were is he getting his protein? He’s going to get anemic. You’ll stunt his growth. The comments all come from a place of concern and love, so I don’t take offense.

The Mister isn’t a problem. He eats whatever I make and has already cut down the amount of meat he eats. He says Nico inspires him. The pediatrician said that I should not discourage Nico and that he wished all his patients were budding vegetarians. I have the support of Nico’s dad and his pediatrician, and that’s enough for me.

Nico says it’s important to him that I do this too, and of course I will. It’s not like he’s asking me to join him in his den of ill repute! That said, I do need some advice. We don’t know any vegetarian families. We definitely don’t know any vegan families. I’m not afraid of being different or trying something new. I consider this an exciting adventure and am up for the challenge. I’m hoping someone here has a vegetarian/vegan family that can lead the way and give me tips.

Day 129: I took all that mint and made a chocolate