Hello! Welcome to the latest episode of Hi/Low Blogger: Your place for jeers and tears. Two days of funny means now I’m going to depress you thoroughly. Let’s get started!

Yesterday I was out in the backyard taking pictures of Buddy and Buttercup after a not-so-great visit with the vet on Monday. (Because Monday was a pissed off llama.) I took Buddy in because his hind legs were becoming increasingly weak, to the point he would fall or toe under (his toes curled under when he stood, almost like he was standing on the top of his hind left paw). We have hardwood floors, so I was hoping it was “slippery floor for old dog” syndrome. Holy Incorrect Assumptions!

We did Buddy a huge disservice when we allowed him to become a tri-color mound of sad after Buster died. He didn’t want to move, and we didn’t push the issue. Thanks to our over-indulgence, the muscles in his hind legs, especially the left, have atrophied. He can’t take steroids because of his history of infection, so right now he is on an anti-inflammatory. I did some research and decided to rebuild his muscles using three gentle, short walks every day. Mikey does two of them, and already I’ve seen an improvement in his walking.

Buddy and Buttercup looked so pleased as they sunned themselves that I decided to come inside and write about their bro-mance. I did, without thinking or editing, and posted it to tumblr. I’m adding it here for safe keeping more than anything else since most of you read it already. 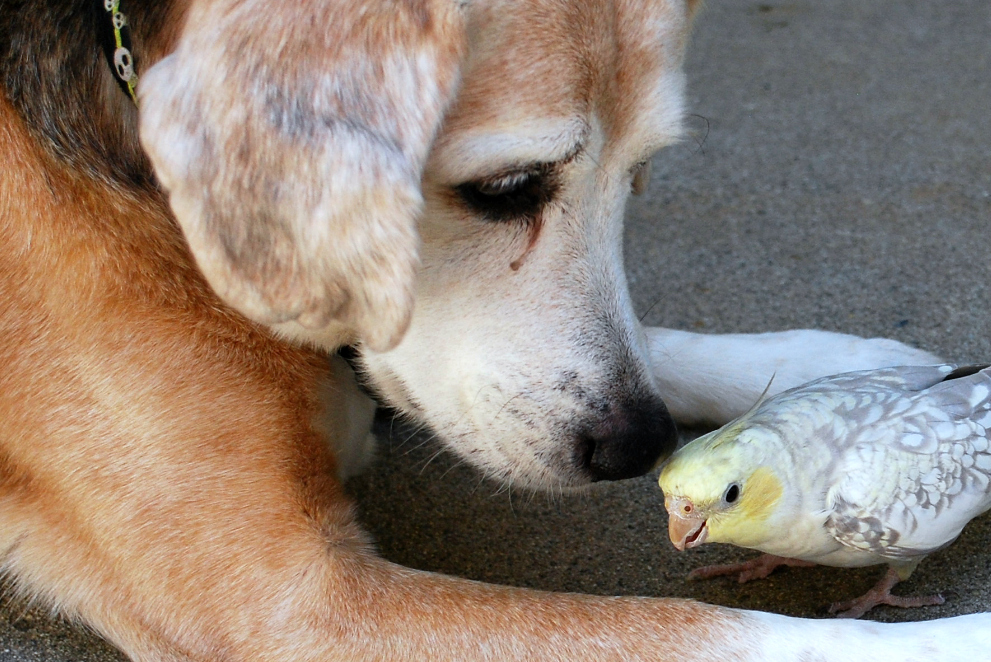 I never understood why someone would want a bird as a pet. I had two canaries as a child and don’t remember anything about them except the day a cat got to one and the other flew away. I lumped bird people with horse people. Both groups were zealous pet lovers more comfortable with their oddly-footed animals than people.

On March 8, 2014, our 13-year-old beagle, Buster, died of an aggressive bladder cancer. We didn’t see it coming, and neither did Buddy, his friend for life.

We brought Buster home when Buddy was 6 months old, so it’s likely neither one remembered life without the other. We worried that Buster’s passing would be difficult for Buddy.

We were terribly, horribly right. 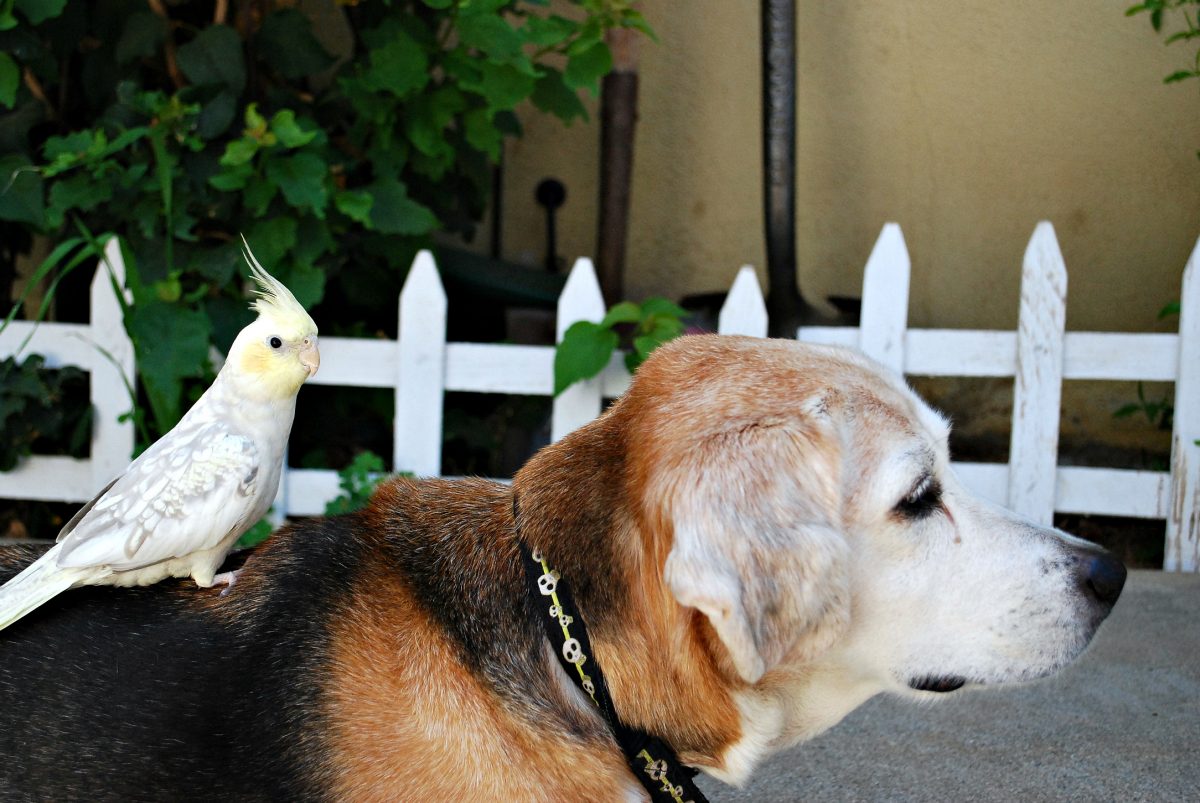 For weeks Buddy stayed by the door waiting for Buster to come home. He wouldn’t eat, wouldn’t bark, and wouldn’t move except to go to the bathroom. Almost immediately he developed pneumonia. With his already compromised “old man” lungs, it took him weeks of antibiotics and a series of breathing treatments recover. On March 7, 2014, he was an exceptionally healthy and happy nearly 14 year old beagle. By May, he could barely walk and was coughing incessantly.

We brought home Buttercup in the middle of May.

For the first time in months, Buddy’s ears pricked up. He was curious about something, finally. He started sleeping again in the bed he shared with Buster, though he stuck to his side of the bed. (Old habits die hard.) He moved, usually to wherever Buttercup was. He sniffed. He ate. He wagged his tail. 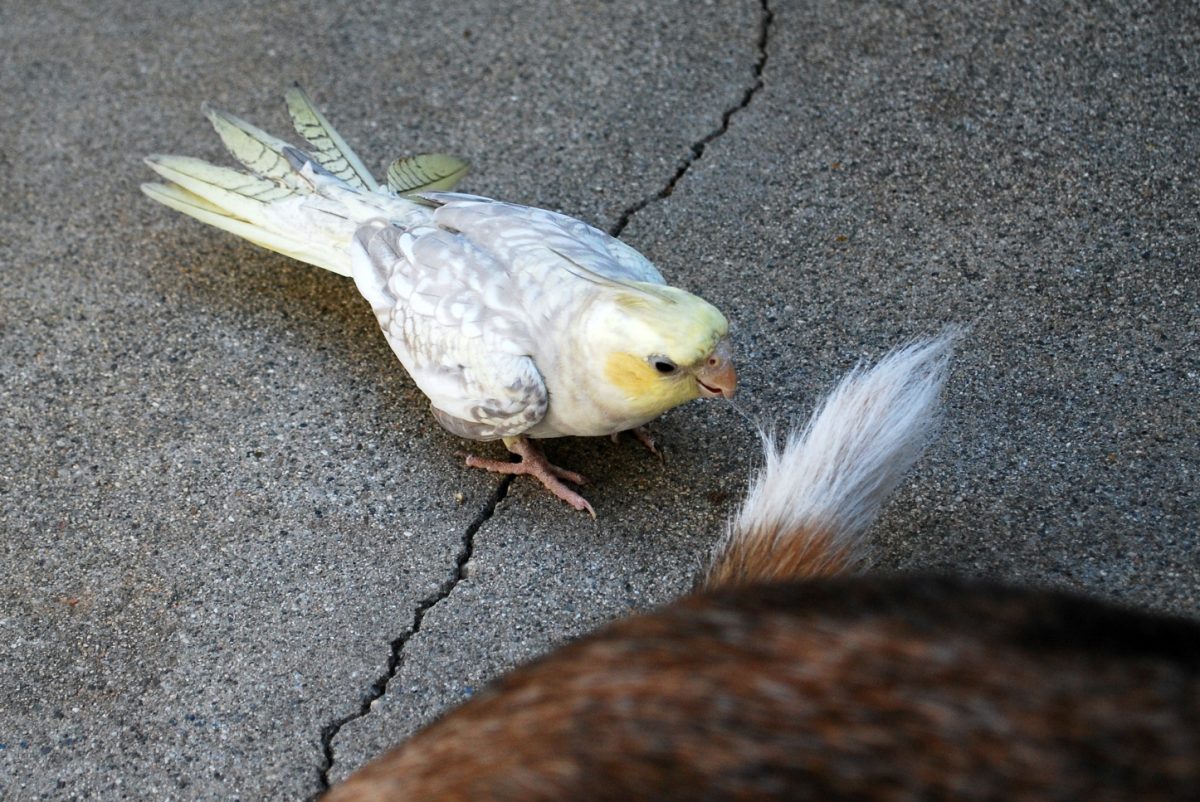 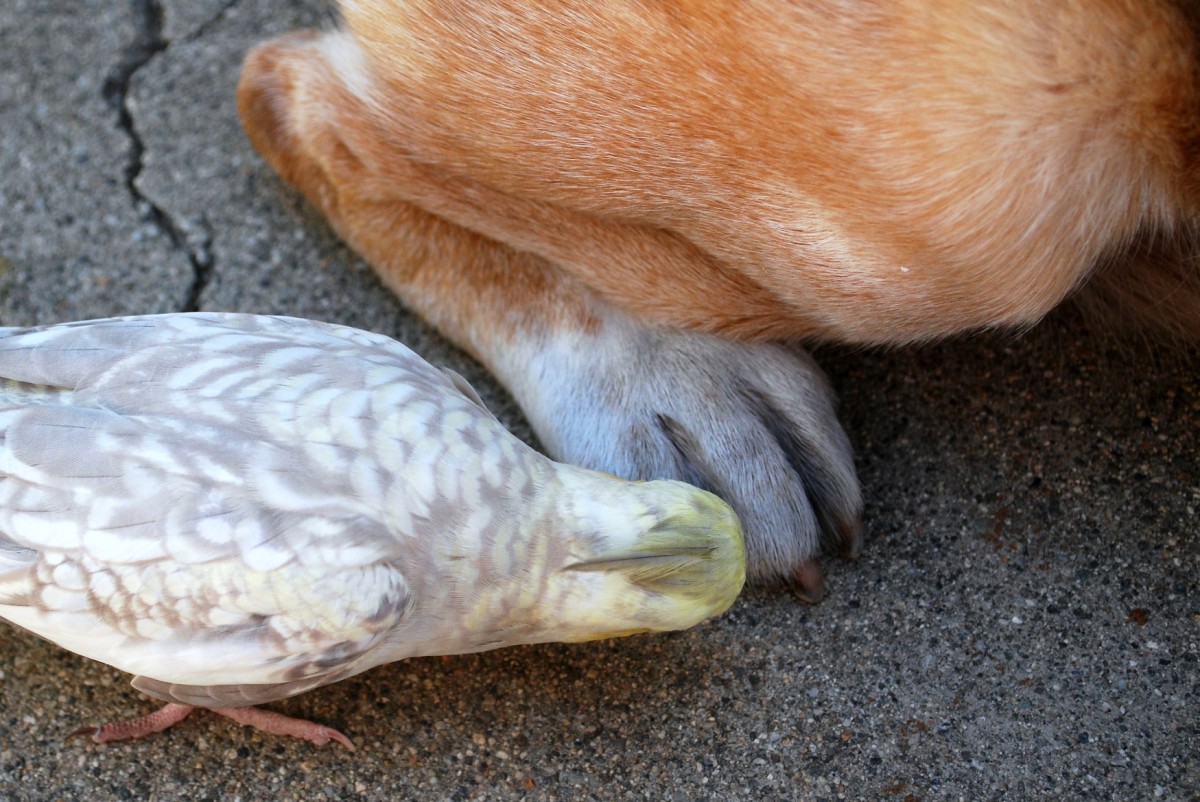 Buttercup, we think, knows what Buddy needs in that innate way animals just know. He meticulously grooms Buddy. He perches on him and lets Buddy walk him around the yard. He lets Buddy sniff him and doesn’t get offended when Buddy gets spooked and moves to sit close to Buttercup, but not that close.

And just like that, I understood bird people. I became bird people. I learned about their complex social hierarchy, how intelligent they are, and how loving they can be with their non-bird family. I learned all this not by reading books, but by watching Buttercup slowly bring Buddy back to life. 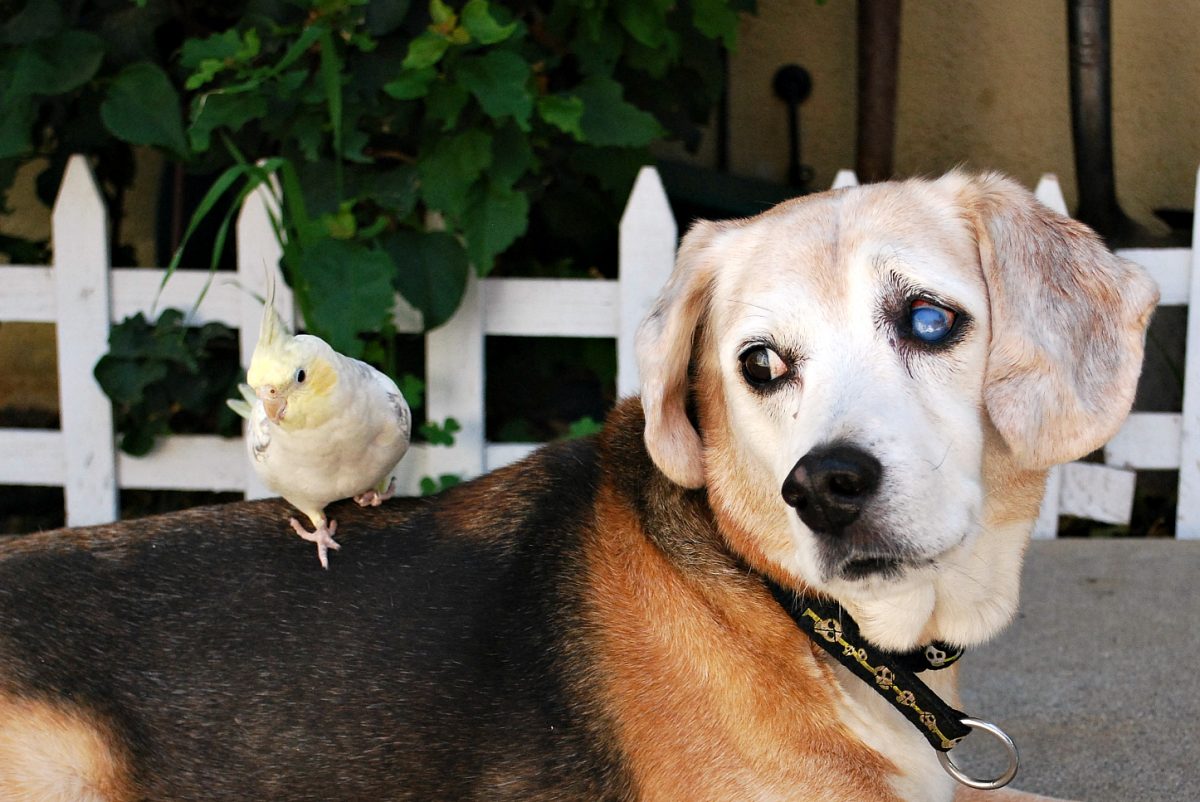 Buddy still has problems. He’s blind in one eye and nearly deaf. His hind leg muscles have atrophied because of his refusal to move more than necessary after Buster died. He still coughs and he gets up in the middle of the night to use the bathroom. He’s 14 years old, after all.

Still, it’s amazing to us that 83 grams of feathers did for Buddy what two vets and an adoring family couldn’t. A pastel-faced, cinnamon pearl cockatiel gave a 14 year old beagle the companionship he missed and the will to keep going just a little bit longer. Buttercup is worth his puny weight in gold, 100 times over.

« What I Did When it Hit the Fan
Jill’s Garden »