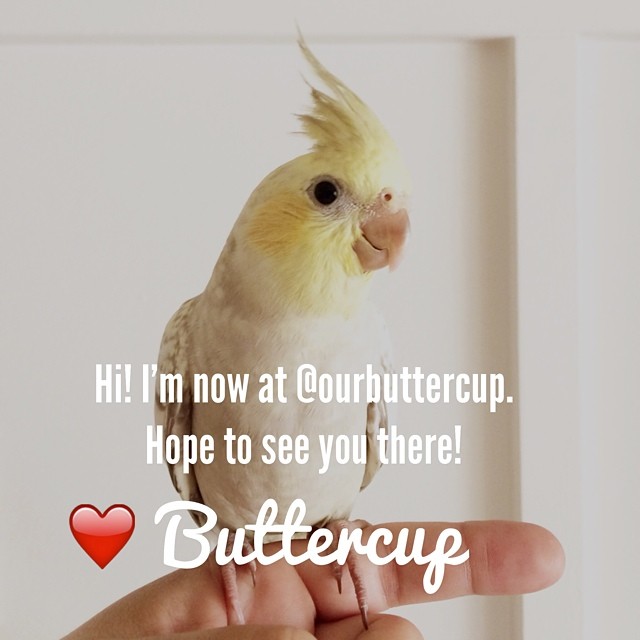 Our cockatiel has her own instagram account. I loved the idea of posting as many pictures as I like in as many creative scenarios as possible. Mikey and Nico were huge supporters of the idea. It’s not like I needed much encouragement, so I grabbed the ball and ran with it.

Best thing I’ve done this year, aside from allowing Nico to buy a bird. First, it’s a place where I can be my cooky-creative self because for some reason, I don’t feel comfortable doing that on my personal account. I’m not a fan of posing kids in artsy, fake positions and then pretending to the world that I just happened to capture them eating salted caramel gelatto while riding red bicycles. #soblessed #summer

Birds? Birds are a different story.

Second, and most exciting, is that this immediately became a Mikey/Mom project. Mikey helped me with the name (and rejected several of my suggestions), takes all the pictures with me (setting up, holding Buttercup or props), and has even started a list of picture ideas (he wants to dress up Buttercup as a Sith Lord, and is currently making her a miniature light saber). He’s really into it, and I love that this is something creative we can do together. It’s a mother-son bonding thing. Nico is involved, too, but will be more help when he’s a little bit older. He currently provides comic relief and plays with Buttercup. 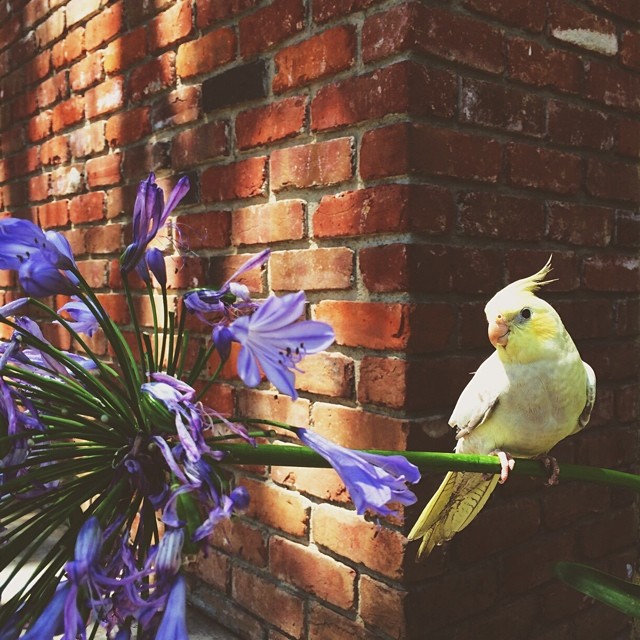 I’ve received a few questions about Buttercup over the last few weeks, so I thought I’d answer them to the best of my new-bird-owner abilities.

Buttercup will fly from my hand to my shoulder, or from her cage to the ground and then to us on the sofa. Sometimes she walks around, but because she’s so tiny, I rarely let her do that for long. I’m afraid she’ll get stepped on! We leave her cage door open much of the day if we are in the room with her, and Nico fashioned a “balcony” for her that is really just a way to make sure she doesn’t poop outside her cage.

As you can see in the above picture (and in this one), Buttercup doesn’t try to fly away when she’s outside. She sees us as her flock/family, so she has no desire to go anywhere. I put her on my shoulder when I clean out her cage every day, and to do that I have to make several trips outside. She looks around, but that’s about it. Birds are very hierarchical–they don’t call it a pecking order for nothing–and in her mind I’m the boss. Even when she gets spooked, like if a big trucks rolls by, she’ll fly and turn around to see what I’m doing/where I’m going. More on that hierarchical nature in a minute. 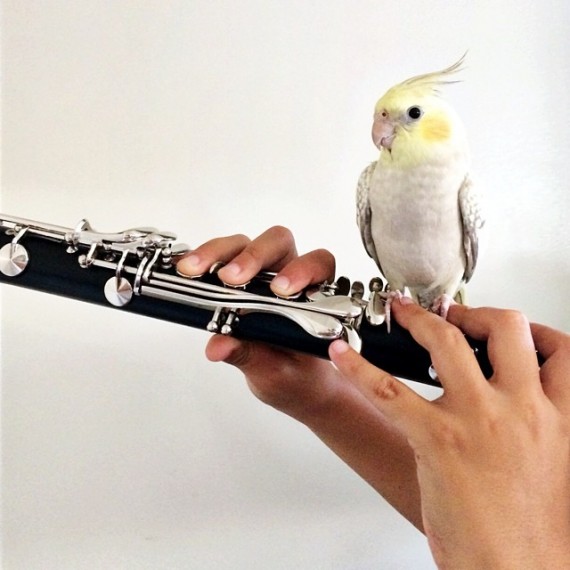 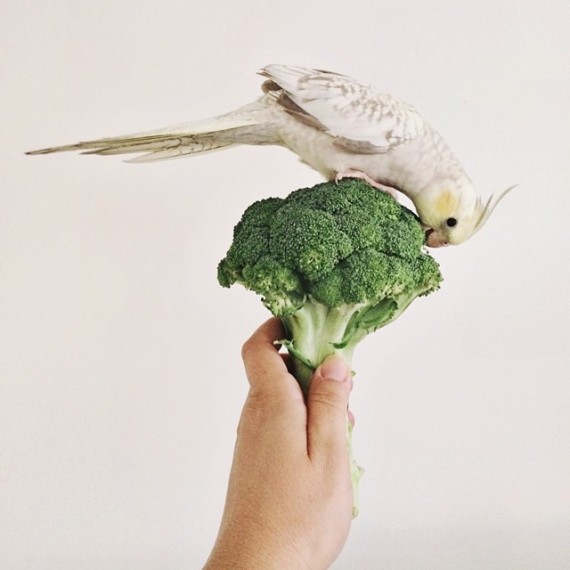 Food: Buttercup eats a raw seed mix that we keep in the garage freezer so it doesn’t get buggy. A lot of cockatiels eat pellets. Millet is her treat, and we keep several stalks in her cage. She also eats fresh, organic fruits and vegetables and grains like Cheerios. Broccoli is her favorite. She’s not really a fan of fruit, though I can get her to eat freeze dried pineapple bits. She can eat whatever we eat with the exception of chocolate, avocado, alcohol, onions, mushrooms, tomato leaves, caffeine, or uncooked beans. Why anyone would feed a bird alcohol is beyond me. 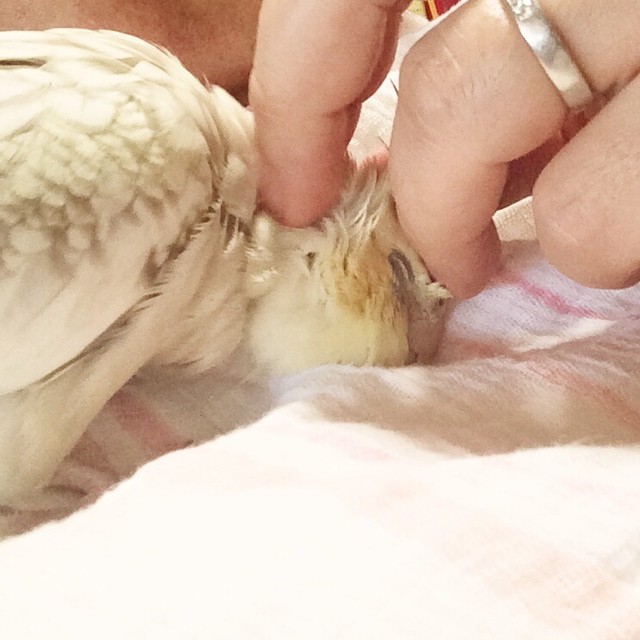 Temperament: Cockatiels are just like cats or dogs. They are unique individuals with their own personalities, so one cockatiel isn’t going to be like the next. Buttercup is a sweet, docile bird. She’s very timid, very affectionate, and needs lots of snuggles throughout the day. That’s a picture of her dozing while I rub her neck. She doesn’t not like us to be gone for very long, and on the rare occasions we are, she pouts. We were gone most of yesterday, and when I got home I was greeted with a deafening silence. No chirps, no hellos, not even a wolf whistle.

Having a gentle, submissive bird is great, but there are drawbacks. When we first met Buttercup, we had to decide between her and her sibling. The obvious choice for me was to bring home both of them. That’s what we did with Buddy and Buster, and what I assumed we would do with birds. We were advised against that because of Buttercup’s temperament. Buttercup is dead last in the pecking order–at least in her mind. They had to separate her from her brother (put them in separate cages) because she was so submissive that he wouldn’t let her eat and she became dangerously underweight. When we brought her home, I had trouble getting her to eat, and again she lost weight. I finally realized that she is a ground feeder. Now I put her food in the food bowls and give her servings of the same foods on the floor of her cage. She’s almost back to her initial weight!

I’m learning something new about birds every day! I never knew how social they are, how affectionate, and how structured they keep their societies. It’s very interesting! If you have any more questions, I’ll do my best to answer them–but keep in mind I don’t know too much. In the meantime, if you would like to see more of Buttercup’s (and mine and Mikey’s) antics, you know where to find us. :)

p.s. This is a pretty good video on common cockatiel behavior.

« Outdoor Decor for the 4th of July
The William Morris Project: 2014 | The Plant Stand »