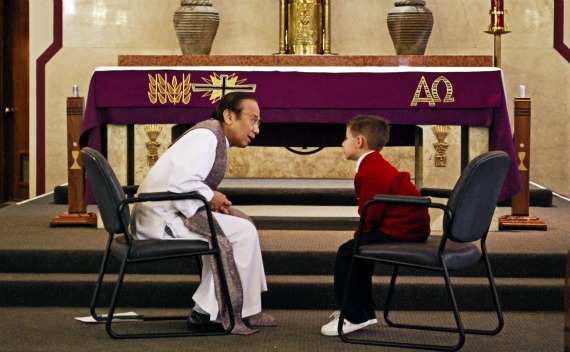 On Saturday I got to spend time with my family and the boys had a blast playing with their cousin, Gabby.

We gave day of rest new meaning on Sunday. Bliss.

Last Monday Mikey received the Sacrament of Penance and gave his first confession. The priest tried valiantly to keep a straight face while Mikey spoke earnestly and passionately. There were hand motions, some gesticulating, and a shoulder shrug and head nod to the priest that all but screamed, “You know how it is, Father.” Indeed! Shortly after I took this picture, the priest gave up all pretenses and laughed. I’ve been on the receiving end of Mikey’s rhetoric for 7 years now, and I can assure you the priest didn’t stand a chance at maintaining his composure. When I asked him later what the priest found so funny, Mikey just gave me a look and said, “Mom, you know it’s supposed to be private.” Then he thought about it and, no doubt feeling magnanimous after his religious experience, decided to toss me a bone. “I think he was laughing when I said I like to wrestle with Nico and roll him like a bowling ball.”

I spent Tuesday talking about books with an intelligent group of women. It’s a wonderful feeling to know the people who read your blog are people you would like to hang out with in real life.

On Wednesday no one threw up.

Tiffany called me on Thursday. We spent an hour on the phone talking about The Hunger Games (reading them over the weekend was her idea), the most disturbing things we’ve ever read (mine is a short story by Anton Chekhov), ex-boyfriends, movies, and how catching yourself in the mirror wearing only undergarments can be a bit of a shock if you aren’t prepared.

Friday is girls night! It’s Helena‘s 40th birthday next week, and we’re going to party it up. That prediction assumes a loose definition of the phrase “party it up.”

« Potatoes and Onions
The Meaning of Lavender »