I’m stunned, and not just because the Mister cleaned out his closet. I just finished the 31st day of 31 days of William Morris. I’m done. Before we talk about the end of this series, let’s take a look at the Mister’s closet, shall we? 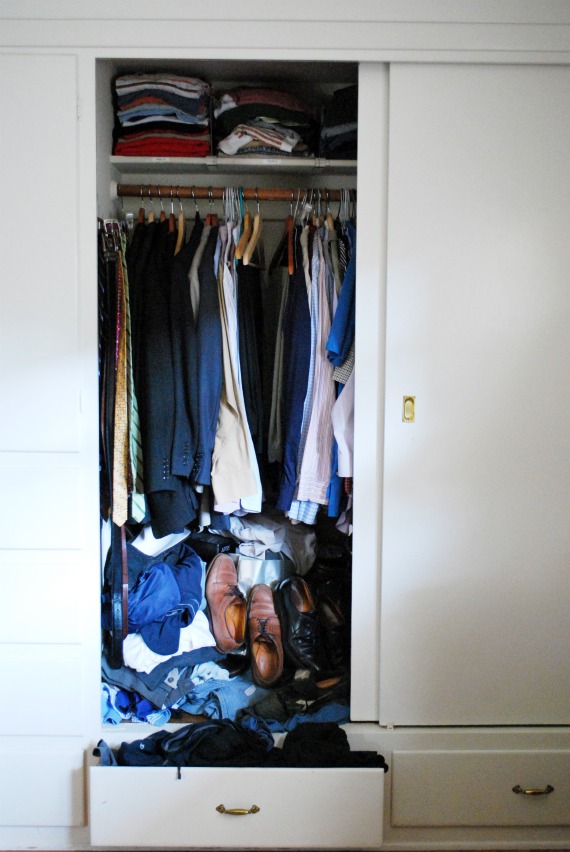 I couldn’t even open the right side all the way.

The Mister is, usually, neat as a pin. He’s the one who labels drawers and cabinets, does the laundry, and takes two showers every day. (Really, he does.) But when he was laid off after ten years with the same company a couple of years ago, the stress and anger and disappointment got to him. I watched as he went from someone who always put his clothes away to someone who would do it later. Eventually. Maybe one day.

He found a job right away–with Helena’s dad, actually–but it took him a long time to regroup. For many of us, our value and self worth is inextricably tied to our careers. When that connection unravels, it can take time to piece yourself back together. The last two years have been about him finding a good paying job and realizing he is the same great guy he was before the economy took a turn. He’s finally starting to believe it. I think 2012 will be the year when he once again terrorizes me with his label maker.

I told him a couple of weeks ago I would do his closet for him. I could tell the idea seemed daunting to him. He waved me off and said he didn’t think that was fair, that he would do it before the end of the month. Secretly, I think a small part of him was afraid I would leave him with nothing to wear. I know this because he said, “If you do it, you’re not going to leave me with anything to wear, are you?”

So while I painted trim in the kitchen, he cleaned out his closet. It looks amazing. There is still clothing I think he can purge, and I need to clean out a few dresser drawers so he has a place to store his shorts, but he is well on his way to a clean closet. 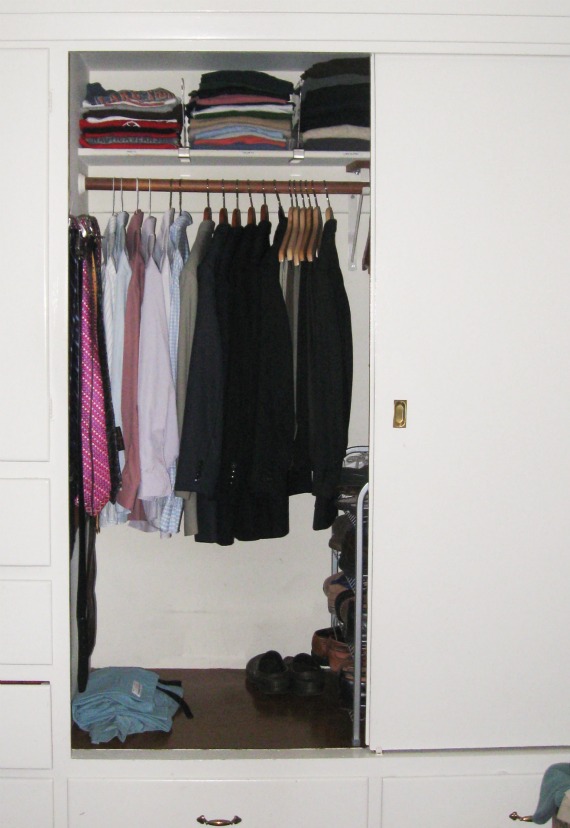 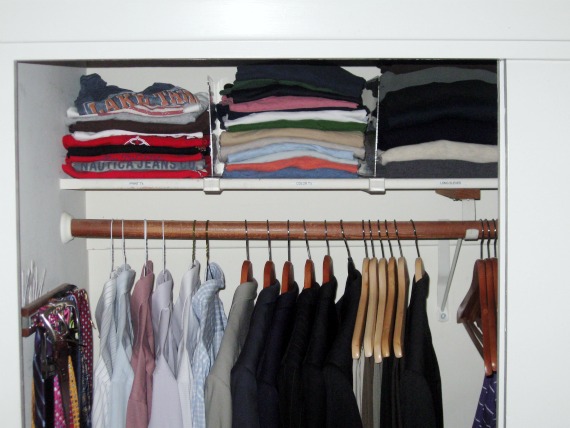 I could never keep neat stack of shirts on such a high shelf, but he’s managed it for several years. Same goes for shoe racks. I can’t keep those things clean, but he doesn’t have the same problem. More power to him. In our case, his and her closets are a marriage saver. We have entirely different ways of keeping our closets clean and organized.

Let’s review the month, shall we?

I accomplished most of the items on my list, but still have many more to go. If I wasn’t achy and feverish, I could probably communicate my thoughts in a more eloquent fashion, but that doesn’t look like it’s in the cards for me today. So, for now I just want to say thank you so much to all of you who hung out with me the last 31 days. You were such a big support network for me this month. I put up ugly pictures and so-so afters, and you cheered me on every step of the way in the comments, on Twitter, and on Facebook. Thank you.

I also want to thank Nester for coming up with the 31 days series. I wouldn’t have done something like this without her invitation to join along.

Finally, I wanted to ask you what you thought of me continuing this series and making it a permanent part of my blog. I couldn’t do projects every day of the week, just like you couldn’t read my projects every day of the week. We all have lives, and they are better spent with family and friends than they are in front of the computer. I thought 1-3 projects per week sounds like a realistic number. Some big, some small. None of them meant to impress, really. My goal is to turn our house into a home rather than produce shocking before and afters.

I’ve taken a strong interest in simple living and all that entails, with the exception of living like a monk. I’d like to be a better mom, a better wife, and a better keeper of our home. I would like to whittle down our debt, spend thoughtfully, and stay in the present more than I do. I want to write down a life list and a house list, and cross items off of both. If that sounds like something you would like to see, let me know. But right now, I’m most interested in seeing the back of my eyelids. Night-night.

New here? For the next 31 days I’m living according to the famous William Morris quote. You can learn more about the project here.

« Day 30: Painting the quarter round is worth it.
The Life List (in progress) »