Only I could nearly maim my child on a walk.  Although, in my defense, it was a walk with Nicholas.  The child is accident prone, plain and simple.  In the same week I almost killed him, he also bumped his head twice, split his lip, got his foot caught in a jar, and–wait for it–fell off the sofa.  He wasn’t jumping or running on the cushions or standing on his head.  One minute he was marveling at a triceratops, and the next he was on the ground, feet in the air with a confused look on his face.  My face wore the same expression.

The day before we went on our fateful walk, The Mister remarked that Nicholas reminded him of his youth spent in and out of emergency rooms.  See?  Clearly not my fault.

Back to the walk.  I decided a couple of weeks ago that I was spending too much time in front of the computer, replying to emails, writing posts, etc.  I needed more fresh air in my diet.  I also wanted to try out a new camera technique I read online.  For all these reasons and more, I decided I should take the dogs and Nicholas on a walk and, while we were out, practice my new camera trick.  See how I am killing twenty million birds with one stone?  Twenty millions stones and a toddler.

So there I am, rushing everyone out the door.  Leashes, check.  Dogs, check.  Toddler, check.  Stroller?  Hmmm.  I debated letting Nicholas walk alongside me and the dogs.  Nah, better let him ride in the jogger; it’s safer. <—– Foreshadowing.

And off we went.  I was walking in a flat neighborhood.  The kind of flat where you are not exactly sure if the street has a pitch, so every time we stopped for me to take a picture I would let go of the stroller to see if it would roll.  If it moved even just a little bit, I applied the emergency break. <—–Warm.

A young couple just snatched up this house as a foreclosure, changed the facing to stone, and repainted. I don’t love the minty green color, but to each their own. It certainly looks better than before. {click.} {click.} 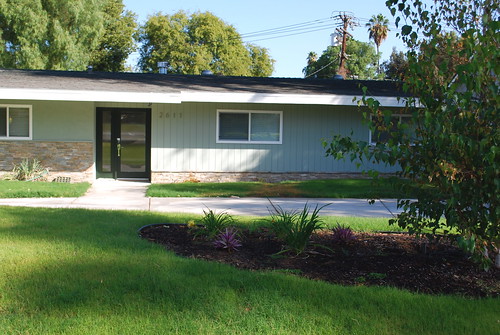 Did I pass my favorite house? The one with all the hanging plants and the black garage door? I guess I did. Oh well, I will just take the long way on my walk, circle back, and then take the picture at the very end. Look at me! I’m so active! <——Getting warmer.

I love traditional houses with red doors and kick plates. Consequently, I love this house. Street check: flat. No movement, no brake. {click.} {click.} <—–Getting hot. 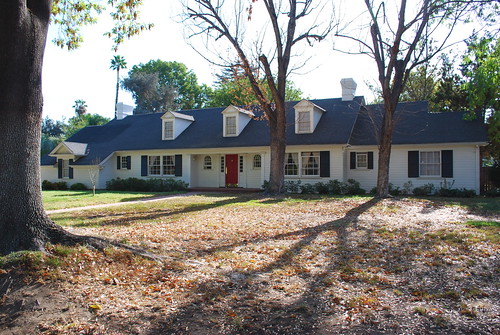 Oh, look.  This house still has the original rock roof.  I wonder what it looks like inside?  I should research the rock roof.  It would be interesting to know the idea behind the style.  Street check:  still flat.  Hmmm.  I think this entire street is flat!  How nice. {click.} {click.} <——-Almost burning. 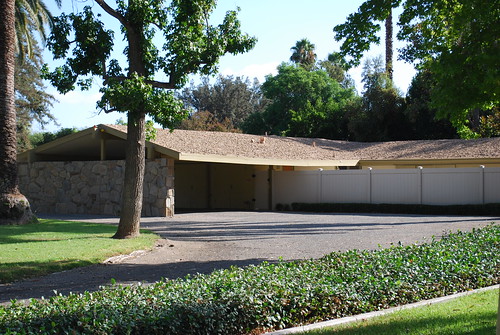 Another red door. I wonder how much the landscaping costs? Street check: flat. {click.} <—-Burning! 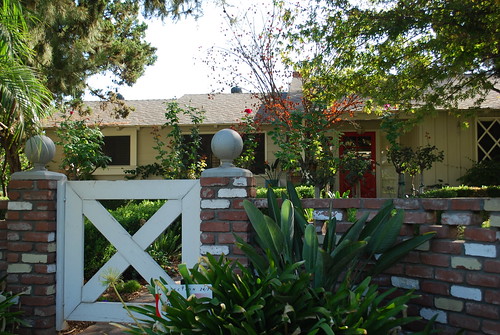 Buddy! Buster! Stop pulling on the leases! Now my picture is all blurry. Let me try again.  Maybe this time I can get a bit of the landscaping in the shot… {click.} <—-Seriously, RING OF FIRE.

{click.} Blargh! Quit pulling on the leashes! What is the matter with you two?!

The soft crash is what snapped me out of my reverie. That, and Buddy and Buster pulling the leashes like a team of wild horses. I looked ahead to see what made the noise and saw a jogger not 20 feet away from me on its side. I did two things.

First, I thought it was very rude of someone to toss their stroller out in the street like that. How hard is it to go to Goodwill?

Second, I reached down to touch Nicholas’s head, because the sight of the stroller on its side made me nervous. You know how sometimes you see something awful happen to someone’s child and you immediately check on your own?   Like, say you are at the park and a child hits their head badly on the jungle gym. Have you ever then reached over and touched your own child’s head in the same spot like a talisman, just to assure yourself they are okay and thank God it wasn’t their head that hurt? That’s what I did, except when I reached down I touched air.

I feel like it took me several minutes to piece together that it was Nicholas in the stroller I thought someone had so carelessly tossed to the side. In reality, it was maybe less than a second before I was off and running with the dogs in the lead. The best I can figure out is that one of the dogs nudged the stroller just enough to get it moving, and even that doesn’t make sense to me. Nicholas rolled down the street, hit the curb and, still strapped in the stroller, fell over sideways.

When I got to him he was crying.  He was bleeding from his nose, which was swelling up like a melon.  A wave of guilt washed away the panic.  Did I break his nose?  Why didn’t I set the brake, even if the road was flat?  How did this even happen?

It turns out I can run when I am not being chased.  I rushed home (remember I decided to take the long route?), stopping every now and then to console a crying, but otherwise fine, Nicholas.  His nose had stopped bleeding (barely bled, actually) but I was worried he hit his head something fierce on the street.  I kept running.

My pediatrician’s office was fabulous and had us come right in.  On the way there we passed a fire truck, which pleased Nicholas immensely.  He spent the rest of the ride talking about it and imitating the siren.  I spent it apologizing to a toddler who wasn’t even listening to me.

When we walked into the office, I told the nurses Nicholas needed x-rays and I need a confession with a priest.  The nurses all laughed and tried to cheer me up with stories of how they almost killed their children.  I thanked them, but the only thing that would console me was a clean set of x-rays.

Nicholas, for all his wily ways, is a champ when it comes to following directions.  He sat through his series of x-rays like a patient 42 year executive on a lunch break, only complaining once when the light was too bright in his eyes.  Ten minutes later, we were back in the pediatrician’s office.  Diagnosis:  Boo-Boo.  No broken bones.

I was still moaning with guilt when the doctor and nurses ushered me gently, but firmly, out the door with a few parting consolations.  Accidents happen!  We’ve seen much worse!  I did something similar with my niece!  Every mom has been there, or will be!  And, my favorite, Now you have a funny story to tell!

Yeah, and a rock solid excuse to avoid exercise.