Some people long for wealth.  Or fame.  Or true, everlasting love.  I just want to face a camera head on without fear of double chins.  Granted, even thin people have double chins.  My best friend was once married to a man with a chin so weak that no amount of diet or exercise could chisel that jaw line into anything more defined than a turkey wattle.  It turns out his weak chin reflected an even weaker character, so the fact his face resembles a plate of flan pleases me to no end.

I, on the other hand, have no desire to look like custard.  So after years of study, I have perfected the art of hiding my double chin.  A talent many of you have witnessed first hand.  The techniques are simple, but work best when you are either taking the picture or comfortable enough to tell the person taking the picture what to do.

Technique #1: Lose weight.  This technique sucks, is rarely any fun, and is impossibly  hard.  But, it’s also the most effective.  Le sigh.

Technique #2: Hide it.  This is where you hide your double chin behind any number of props, including, but not limited to, hands, cameras, turtlenecks, small children, and your husband’s shoulder.

Technique #3: Crop it. Seriously, pull the camera in tight. Conversely, take a regular picture and then crop it with photo-editing software. Either way, get in real close and get rid of that wiggly beast.

Technique #4: Lift it. Stand next to tall people. Lift your chin up just so, as if you are trying to help out the composition of the picture by positioning yourself more in line with the rest of the subjects in the photograph. You’re not, of course. The only composition you care about is the adipose tissue dangling from your jaw.

{Me and The Mister, at my brother’s wedding, before I lost 40 pounds.}

Technique #5: Position it. This is a hard one, but one that when done well, can fool a lot of people. If you do it often enough, you can even fool yourself, a disappointing truth that becomes apparent when you see candid pictures of yourself at a baseball game and all you can think is, really? Damn.

So. If you are taking the picture of yourself, with or without a tripod, position the camera at slightly above eye level. Forehead level is best. Then, every so slightly point the camera down so that the aperture of the lens is pointing at the spot right between your eyebrows. It will be a subtle shift, but necessary if you want your entire face in the shot. Next, more positioning. Drop your chin slightly, push your shoulders back just a touch, and elongate your neck as best you can without looking like an invitation to vampire. All of this is easier to do from the side, by the way.

These techniques are guaranteed to swipe ten pounds off your face. When you consider the camera also adds ten pounds, it’s a bit of a wash, but let’s not think about that. Occasionally, the techniques don’t work, or aren’t enough to combat your natural tendency to look ridiculous. Case in point:

Problems: Hair is wonky. Shoulders scrunched from trying to contain wild dingos. Chin tucked very, very low in an effort to position face closer to said dingos. Smile is plastered on, and looks every so slightly defeated. Camera is positioned dead center, aimed at nose.

Solutions: Edit the crap out of it on Picnik. Increase the exposure. Take down the highlights. Add a 1960s effect to the image. Try taking picture again. 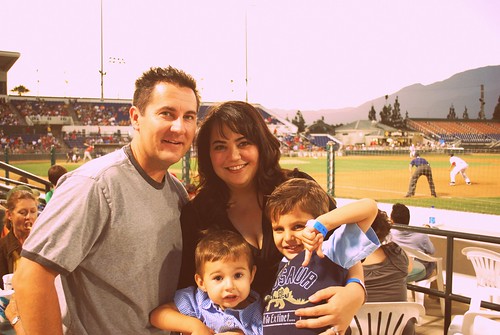 Problems: Hair. Still wonky. Teeth appear bucked thanks to talking through smile at person holding the camera. Camera still pointed at nose, which is looking downright bulbous thanks to your habit of scrunching it up when you smile like a bunny sniffing the wind for predators.  Still wrangling dingos. Grip on dingos too tight, pushing up hovercraft boobs high enough to create two additional chins.

Solution: Edit, edit, edit. And laugh. And realize with trepidation that you will one day look at this picture and think you look young, and that in the end a little double chin isn’t that big a deal.

« Standing Water
This is the Magic Word »