I’m pretty sure my Christmas cards are trying to kill me.

Three years ago I bought blank Christmas photo cards for Mikey’s first Christmas. I had every intention of sending our inaugural family picture to everyone unfortunate enough to cross my path during the last 32 years. I spent hours picking out the perfect coordinating outfits (wouldn’t want to look too matchy!) and scheduled our portrait appointment with glee. I even had the brilliant idea of including our two beagles, Buddy and Buster. These were going to be the best pictures ever!

We arrived at the 8:00 am appointment on time and were positioned on a stage about 3 feet off the ground. The rest is a horrifying blur. Another family brought their mastiff for pictures and the beast wouldn’t stop barking. Buddy and Buster took that as open invitation to slobber, yelp, and fart uncontrollably. When that didn’t stop the barking, they attempted to crash through the make-shift walls separating them from Cujo. The Mr., in charge of reigning in the now-hysterical dogs, started to show cracks in his veneer. “Did you take the picture? Take the picture…now! No, wait. Now!” His face was slick with perspiration and his eyes wide and frenzied. I was losing him fast, but I had my own problems. Mikey was doing the slither maneuver to get off my lap, but since we were 3 feet off the ground I wasn’t giving him any wiggle room. I tried entertaining him by bouncing him on my knee, which worked out great until he figured out how to bounce himself. I could not get. him. to. stop. There we were: The Mr. sweating buckets, the dogs squirming and farting, Mikey bouncing, and me still trying to get my picture, damn it.

Twenty minutes later I’m looking at the most horrifying family pictures I have ever seen. The Mr.’s smile looked more like bared teeth, Mikey was in mid-bounce, Buddy was looking up, Buster was looking left, and I looked like something living under a bridge. And that was the best of the bunch!

Two days later I was at Sam’s Club with a picture of Mikey I took on the lawn ten minutes prior.

When I got home I told The Mr., “We’ll use the cards next year.”

The next year we finally got decent family pictures, but I didn’t realize I had to use the studio’s photo cards. Foiled again! Last year I was 8 months pregnant and felt the picture would be missing something if The Mr. wasn’t holding a harpoon, so we opted for a picture of Mikey on a simple Shutterfly card. Yet again, the cards win.

This year was supposed to be different. I found the cursed Christmas cards while cleaning out one of the closets and decided to schedule an appointment for our first family picture with Nico as part of the clan. I also purchased the most adorable shirts for Mikey and Nico and started writing rough drafts for the inside of the card. The day of the appointment came and the pictures actually came out well. They came in ahead of schedule so I picked them up and put them in a safe spot at home. On Friday I went to the closet to grab the box of cards and take them to the printer. Except they weren’t there.

I opened the drawers. I pulled open the doors. I looked under the beds and in each of the closets. I searched the car and checked the studio in the backyard. In a final fit of desperation I started moving furniture. They. Were. Gone.

See?! My cards are trying to kill me.

Over the last four days, I checked every possible online and brick-and-mortar vendor in search of an alternative that didn’t leave us without money for Christmas. I finally found a reasonably priced set of photo cards at my local Hallmark. They are so lame. Not only are they completely ordinary, I already know people are going to think we are cheap bastards when they see our professional picture in a Hallmark photo card. The pictures cost 3 times what the cards did! I can hear them now, “Whoa. Check out the Kendalls. Couldn’t spring for the in-studio photo cards, eh?” Ouch.

I know I’m going to find those cards. Most likely the day after I put the stupid Hallmark ones in the mail. These cards are evil like that. Well, I have news for them. The second I find them they’re going in the fireplace. And I’m wearing a crucifix and holding a bottle of Holy Water while I do it. 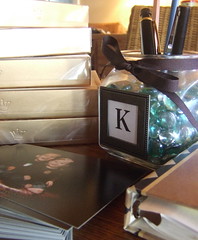